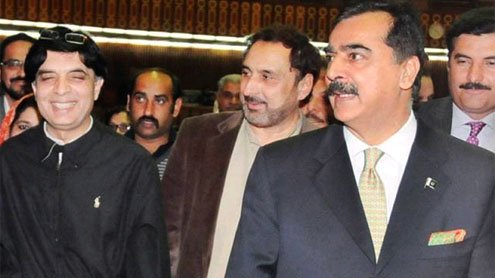 ISLAMABAD: After some last-minute fine-tuning, the National Assembly on Tuesday unanimously passed the 20th Constitutional Amendment.

The amendment – the third by the incumbent government – has set down a process to install a caretaker set-up and hold free and fair elections in the future.“The passage of the 20th Constitutional Amendment has strengthened democracy,” said Prime Minister Yousaf Raza Gilani after 247 members from both the government and opposition benches in the lower house voted for the amended version of the bill, which included three amendments proposed by the opposition.

No members present in the house voted against it.“Free, fair and transparent elections in the country for future generations have been ensured today,” Gilani told parliamentarians. Discussing features of the amendment, he said, “We have all suffered but from now on there will not be any imported caretaker prime minister in this country.”

It was not all plain sailing. Leader of the Opposition Chaudhry Nisar Ali Khan took to the floor after Law Minister Maula Bakhsh Chandio introduced the bill. Nisar said: “The government had committed to consult us for finalisation of the concept draft which we agreed five days ago, but it did not happen.”Nisar said that the amendment is not intended to serve the purposes of one political party, rather it is for the future generation as the NA had “given the Election Commission of Pakistan such powers which has no parallel in the world.”

On his request and the prime minister’s endorsement, the speaker adjourned proceedings for about two hours so that a consensus could emerge. The bill introduced by the government had 10 clauses, but the opposition proposed three amendments and the addition of a new clause, all of which were accepted by the government.Previously, the amendment was aimed at providing legal protection to 28 parliamentarians who were suspended because they were elected between April 2010 and July last year, when the ECP was incomplete. The opposition, however, compelled the government to incorporate its demands as well. The 20th Constitutional Amendment Bill 2012 has given the ECP sweeping powers by minimising the government’s direct role in the appointment and removal of its members.

Under the new mechanism of choosing caretakers, as envisaged by the amendment, both the prime minister and the leader of the opposition in the National Assembly would hold a ‘consultation’ on the matter.The process of finalising names, the fresh amendment said, must be completed within three days of the assembly being dissolved.In case the premier and the opposition leader fail to agree, an eight-member committee comprising four members from both sides will come up with its suggestions. If this panel also fails to agree, the ECP will then be empowered to send names to the president.

The amendment also envisaged that four members, one from each province, would be chosen for five years and the government would have to follow the same procedure to seek their removal, as is the case with High Court judges.Previously, only ‘consultation’ with the opposition leader was required for appointments on key posts, a weak use of terminology that the PML-N accused the government of exploiting in the past.Earlier, the federal cabinet approved the draft of the constitutional amendment. Chaired by the PM, the cabinet cleared the bill, with Information Minister Dr Firdous Ashiq Awan calling it a historic day as the “democratic government achieved another milestone by proposing the 20th amendment with the consensus of all the stakeholders.”

The cabinet also lauded Gilani for appearing before the Supreme Court to face contempt charges out of his respect for the judiciary, the minister added. But, an insider said, a proposal by some of PPP members to seek support for the premier from the national parliament and all four assemblies was rejected by Gilani himself. – Thetribune