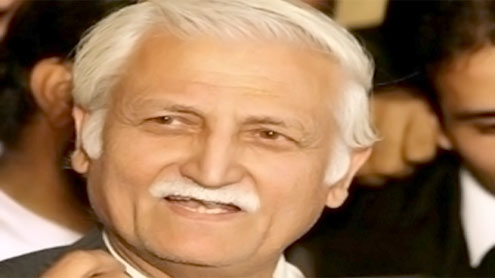 ISLAMABAD: Presidential spokesman Farhatullah Babar Monday said according to constitution of the country President Zardari would continue to enjoy full immunity until the relevant article was amended by the Parliament.

Talking to media persons here on Monday he said the government had always respected the judiciary and would continue to do so in future. He said PPP government had faced such difficult times in past and rendered numerous sacrifices to strengthen the democracy in the country.Babar said PPP would continue struggle for supremacy of law and constitution in the country. He said PPP also rendered many sacrifices in the movement for restoration of judiciary.  The spokesman said ups and downs for the prime minister were part of politics and the PM would face it.

Meanwhile, expressing complete confidence in the superior judiciary, Minister for Information and Broadcasting Dr Firdous Ashiq Awan Monday said the Pakistan People’s Party (PPP) government believed that justice would prevail in the end. Talking to media persons outside the Supreme Court, the minister said that the government would follow constitutional parameters and hoped that all institutions would remain in their respective domains.  She said a perception had been created that government would not obey orders of the Supreme Court which had nothing to do with reality.

“We have come to the Supreme Court by obeying its orders and we came here for supremacy of the Constitution,” she said.To a question about future strategy of the PPP, the minister said that all decisions would be taken in consultation with the allied political parties.  Replying to another question, Dr Firdous said that govt would not hold trial of the grave of Shaheed Mohtarma Benazir .

The president enjoyed complete immunity under the Constitution, so no letter could be written to the Swiss govt, she added. She said Gilani had become the first prime minister in the history of the country who appeared in the Supreme Court twice. “He will keep respecting courts and their decisions,” she said adding, “PPP has sacrificed a lot for revival of this judiciary and for strengthening of the institutions”.