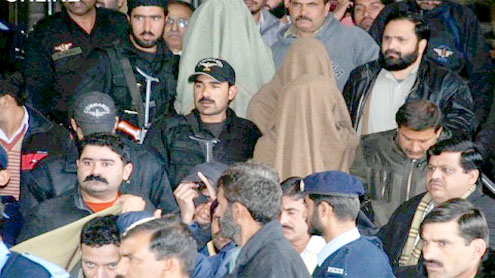 ISLAMABAD: The Supreme Court on Monday sought the record of proceedings and legal justification of keeping in detention the terror accused, allegedly picked up by the agencies outside the Adiala Jail after their release, at an internment centre in Parachinar.

During the hearing, the chief justice questioned the spy agencies’ counsel who would be answerable for the death of four prisoners.The court also ordered the officials to provide proper food and medical treatment to the seven prisoners, who were brought before a three-member bench, headed by Chief Justice Iftikhar Muhammad Chaudhry and comprising Justice Khilji Arif Hussain and Justice Tariq Pervaiz.

Attorney General Maulvi Anwar-ul-Haq and Raja Muhammad Irshad (counsel for the Inter-Service Intelligence (ISI) and Military Intelligence (MI) chiefs and the Judge Advocate General (JAG)) were ordered to procure record to satisfy the court about their detention prior to January 26, 2012 and tell whether they were proceeded under any provision of law, and if so, what was the result.The Khyber PK chief secretary was asked to collect the relevant records to satisfy the court that under what circumstances the detainees were allowed to be admitted in the internment centre by the internment authority (Khyber Pk governor), as the action could not be taken in a mechanical manner, but had to be taken through an order passed by applying judicial mind, as authorised in the Actions in Aid of Civil Power Regulation 2011.

Earlier, the spy agencies counsel produced seven of the 11 missing prisoners. Four of them Muhammad Amir, Tahseenullah, Said Arab and Abdul Saboor have already died in custody.Mazharul Haq, Shafiqur Rahman and Muhammad Shafique were brought from the Parachinar centre, while the reaming four, Dr Niaz Ahmad, Abdul Majid, Gulroze and Abdul Basit, were transported from the Lady Reading Hospital, Peshawar.Their condition was not good and they were unable to walk properly. On this, the chief justice expressed grave concern, saying if they were criminals then the court had no sympathy with them, but they should be treated in accordance with the law.

The court inquired from Raja Irshad why his clients had not produced the prisoners before the bench on the last date of hearing. “Keep it in mind that the court will not run according to your wishes,” CJP told him.The counsel stated that for the last hearing on 10th of February, the arrangements were being made to shift them from Parachinar to Islamabad, but the helicopter was not in a position to operate on account of snowfall and poor visibility there. But Chief of Army Staff Ashfaq Parvez Kayani, in compliance of the court order, directed the ISI and MI to make arrangement to shift them to Islamabad safely, he added.

Justice Iftikhar directed him to submit his explanation regarding the matter in writing.Chief Secretary Ghulam Dastagir, who appeared on the behalf of Khyber Pk governor, pointed out that the missing persons were in detention from January 26 and were kept in FC Fort Parachinar in Kurram Agency, which had been notified as an internment centre. He also submitted reports to prove his argument.Tariq Asad, the counsel for the petitioners, said all the seven persons had been kept in illegal detention and were not provided proper food and medical care, on which the chief justice said,

“There should be proper medical treatment and they shall not be shifted to the internment centre in Parachinar, as long as the matter is pending before the court.”The court also ordered the chief secretary to arrange meetings for prisoners with their family members and to submit a report about the health and condition of the detainees after every four days to the Registrar Office.Later, the relatives were allowed to meet the prisoners at the attorney general’s office.Further hearing of the case was adjourned till March 1. – Nation