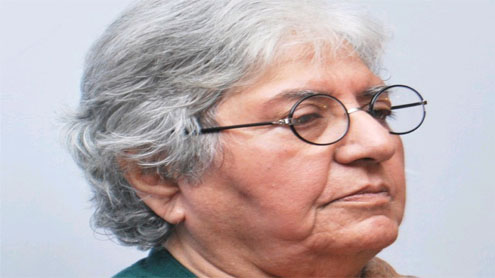 KARACHI: On the last day of the third Karachi Literature Festival, MR Kazimi took the responsibility of playing moderator for the session on Looking Back at Partition very seriously.

As soon as the session came to order, he started off with a slideshow of articles and quotes on different aspects of Partition. He even had other material ready for the speakers to look over before they made any comments.He had set three agendas for the session – the validity of the two-nation theory, was the division of provinces in 1947 justified and the marginalisation of Pakistani Hindus.Once he was done with those details, he proceeded to introduce the speakers – former minister and historian Dr Hamida Khuhro, historian Yasmin Khan, Dr Syed Jaffer Ahmed, writer and translator Alok Bhalla and columnist Asif Noorani.

Dr Khuhro spoke first. She said that the two-nation theory was not valid and had never been valid. “Its proponents forgot that Hindus and Muslims had lived together for more than 1,300 years and had contributed to each other’s heritage,” she said. “How can you divide two nations when the line of division weren’t even clear in the first place.” She added that the theory was ‘untenable’.

Khuhro said that she didn’t see much marginalisation of Hindus in Pakistan. “As far as I have seen, the community has lived here for ages and are well settled,” she said. To this, Noorani quipped that they were only kidnapped sometimes. The audience made a sound that was something between a snigger and a chuckle. Khuhro immediately responded and said that they were kidnapped because of the law and order situation and because they were wealthy. She added that she couldn’t offer a definite opinion on the issue.

As the microphone was passed on to Khan, she said that she was fascinated by the process – the before and after of Partition which validated the Two-Nation Theory on both sides of the border. She reminded the audience that the first constituent assembly of Pakistan had a Dalit member. Minorities like the Parsis were kept from migrating to prevent the collapse of infrastructure like banking and education in Karachi.Jaffer, who is the director of Pakistan Studies Centre at University of Karachi, thought that Jinnah only wanted to safeguard the interests of Muslims. He used the Two-Nation Theory as a political tool and was the first one to negate it in his speech of August 11, 1947.

Khuhro immediately responded that it was not Jinnah but Lala Rajpat Rai, an Indian author and freedom fighter, who was the first person to disagree with the theory. The leaders had embarked on a ‘religious project.’ “Pakistan needs to be declared a secular state,” he said. “We should accept, respect and enjoy the diversity and not suppress them.”To this Bhalla added that he was glad someone spoke about secularism. “I did not want to say it myself because it would be a breach of hospitality,” he said. “India has problems with minorities too, but every time the government misbehaves, a large number of people were always there to protest. This is our saving grace.”

Bhalla was certain that literature from both sides of the border, before and after 1947, considered Partition inexplicable. He said that none of the writers thought that the differences were so great that they could not be bridged with dialogue. He added that it was reflected in post-1947 literature. “Not a single piece of literature described that the people felt like they had come home after migration,” he said. “Instead it is full of memories of what people left behind. The people didn’t go to their gurdwaras, mosques and temples to thank their gods for Partition.”However, Noorani had a different story to tell. For him, Partition was a blessing because otherwise, his wife’s family would have stayed in Meerut and his family would have remained in Bombay and he wouldn’t have met his wife. “She would have been married to a Meeruti man,” he said. “Who knows I might have been married to a starlet who would have filed for divorce already.” – Thetribune