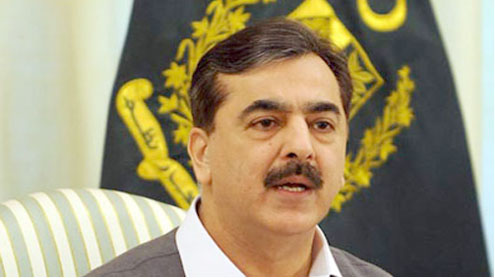 ISLAMABAD: Prime Minister Yousaf Raza Gilani will be charged with contempt of court. It’s final – February 13 is the D-Day.

The willful refusal of the prime minister to obey the repeated judicial orders since December 16, 2009, to write a letter to foreign authorities to reopen cases closed under the National Reconciliation Ordinance (NRO) has brought him an unprecedented ignominy, with the Supreme Court finally closing all doors on him except keeping a window of apology open for him still giving him an opportunity to bow before the rule of law.An eight-member bench, headed by Chief Justice Iftikhar Muhammad Chaudhry, on Friday dismissed an intra-court appeal of the prime minister against the decision of a seven-judge bench that decided to proceed against him for contempt of court.

After hearing Aitzaz Ahsen, counsel for the prime minister, at length for two consecutive days, the court rejected the appeal. During the two-day hearing, the court tried to convince the prime minister to write a letter to the foreign authorities in compliance with the December 16, 2009 judgement of the 17-member bench, which declared the NRO unconstitutional and void ab initio holding that all the cases (including the $60 million money laundering cases against President Asif Ali Zardari in Switzerland and other countries) had stood revived to their pre-NRO position.

Despite citing dozens of judgements, Ahsen could not establish that the seven-judge bench order of framing contempt charges against his client was unlawful and deserved to be recalled.In its order, the court said: “We have concluded, for the reasons to be recorded later, that the seven-judge bench order has been passed strictly in accordance with the provisions of Section 17(1) and (3) of the Ordinance 2003 following the settled principles of the criminal administration of justice, therefore, no interference is called for. Consequently, the appeal is dismissed.”

After dismissal of the appeal, the prime minister will now appear before the seven-member bench on February 13 to face indictment for not obeying the court order.On Friday, Ahsen succeeded in engaging the judges – particularly the chief justice – repeating his arguments that there was no specific reason to initiate contempt of court proceedings against his client, as he (Gilani) did not defy the court orders but he merely followed the federal Law Ministry’s advice that the cases in foreign countries had been abandoned and writing a letter for their reopening was in vain and a futile exercise, which could also be embarrassing for the government as well as the Supreme Court, as the president enjoyed immunity not only within the country but abroad as well.

However, the judges repeatedly opined in their remarks that the situation of the contempt case could be changed if the prime minister was ready to write the letter. “The court is continuously exercising restraint and we don’t want unrest in the country,” the chief justice observed and asked Ahsen to tell the prime minister that this (defiance of the court orders) was not in the interest of the country. He also observed that under Article 190 of the constitution, the premier minister was bound to abide by the court decision in the NRO case. Justice Jawwad S Khawaja observed: “It would be presumed that we will ridicule our institution (judiciary) in case its decision is not implemented.” Ahsen, however, submitted he had not fully quenched his thirst before the seven-member bench where he was not given enough time to make arguments to his satisfaction.

On this, Justice Mian Saqib Nisar asked Ahsen that even now he could consult his client on writing the letter. “We are ready to give you 10 minutes to talk to your client on the phone and let us know,” the chief justice told Ahsen, who said: “I have no mandate to do this.”
Justice Saqib Nisar told Ahsen that although he had apprised the bench that he had no mandate to reply on the prime minister’s stance on writing the letter, even then he (the judge) asked him to contact the prime minister in this regard. “Should I treat these words as direction of the court?” Ahsen asked, and Justice Khawaja intervened, saying: “No, it’s not a direction of the court.”

However, Ahsen submitted that his client could be issued a simple notice, instead of a show-cause notice in the contempt case. He said it would have been better if a plain notice had been dispatched to his client. On this, the chief justice remarked that it was sufficient for the court to be satisfied before the indictment and that it was up to the court as to what extent it could go to hear the arguments to decide about the indictment. The chief justice noted that the prime minister did not even submit any written reply to the show-cause notice. Addressing Ahsen, the chief justice said: “You made a record of constant arguments, like the record you set up by 26-hour continuous driving (during the lawyers movement for restoration of the sacked judges).”