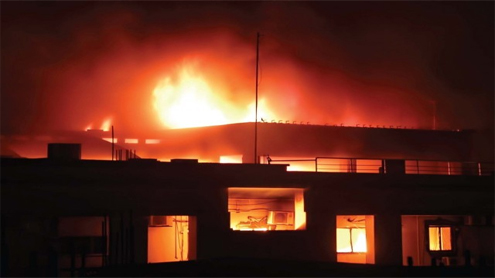 LAHORE: Goods, cloth and equipment worth millions of rupees turned to ashes on Friday when a fire erupted in the New Auriga Complex on Main Boulevard, Gulberg, engulfing the second, third and fourth floors of the building.

The building was a major wholesale cloth market of the city, and happened to house the head office of Wateen Telecom.

The fire, which erupted at around 7pm on the fourth floor of the centre and spread quickly to the other floors, is said to be caused by short-circuiting. However, investigations into the incident are pending to ascertain the real cause of the fire.

Rescue 1122 and firefighters of the city district government rushed to the scene and immediately carried out the rescue operation.

The building was evacuated immediately, but the fire brigade staff could not completely control the fire till the filing of this report.

Thick smoke clouds could be seen in the area as most of the cloth godowns were destroyed in the fire. The incident also caused a severe traffic jam in the area as fire engines blocked the Main Boulevard, affecting traffic up to Jail Road.

Immediately after the incident, Wateen Telecom released a statement, saying that the employees contacted the fire department and rescue services, and while waiting valiantly, attempted to put out the fire. However, despite their best efforts, the fire spread quickly to engulf the third and fourth floors of the building.

Talking to reporters, Wateen CEO Naeem Zamindar said the company had in place several network redundancies that automatically kick-in following any emergency. He said the company had alternate arrangements for the customer care helpline. “Our data and enterprise customers will not be materially affected, as our data warehousing and networking facilities are located elsewhere. We are therefore confident that our customers will not suffer loss of quality and that our services will continue as normal,” he said. –  Dailytimes

I’ve never been on a date: Kareena Kapoor

I’ve never been on a date: Kareena Kapoor