PM will appear before SC on Feb 13, confirms Ahsan 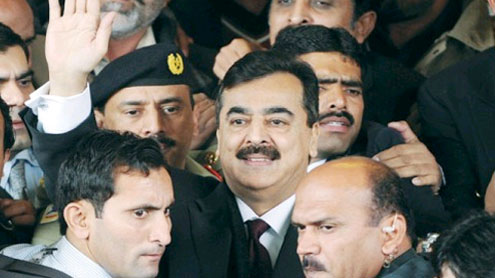 ISLAMABAD: The Supreme Court on Friday threw out an appeal from embattled Prime Minister Yousuf Raza Gilani against contempt charges, paving the way for him to be indicted next week.

Speaking to reporters outside the court, Barrister Atizaz Ahsan, the PM’s counsel,confirmed that the prime minister would now appear in court on Monday.The eight-member bench headed by Chief Justice Iftikhar Mohammad Chaudhry upheld a summons for Gilani to appear on February 13 to face indictment for the government’s two-year refusal to ask Swiss authorities to re-open graft cases against President Asif Ali Zardari.If convicted of contempt of court, Gilani faces up to six months in jail and being disqualified from office.“The appeal is dismissed,” the chief justice told the court, upholding the February 2 summons for Gilani to appear on Monday.

The chief justice said that “the court can go to any extent to implement its verdict”.He wanted a clear answer on whether the prime minister would write to the Swiss, telling his lawyer: “We are ready to give you 10 minutes to talk to the prime minister on the phone and let us know.”Tell the prime minister this is not in the interests of the country (to defy the court order).”“I have no mandate to do that,” replied Ahsan, adding: “It may not be possible for the PM to seek instructions by Monday as he will require more time to do so.”

Throughout the hearing, Ahsan provided the members of court with citation from various cases pertaining to contempt of court charges. However, the chief justice dismissed his arguments by saying that the precedents he mentioned are of civil nature whereas the current case is of criminal nature.After conclusion of Ahsan’s arguments, the chief justice announced a detailed verdict in which he recalled previous National Reconciliation Ordinance (NRO) hearings as well as the government’s refusal to correspond with the Swiss authorities.

He also reiterated that the NRO was declared unconstitutional in December 2009 and all the corruption cases which were closed in Pakistan and abroad now stand reopen.Political analyst Nazir Naji had expressed fears that the Senate elections could be postponed and that the government could also be changed after the budget.Justice (r) Shahid Usmani told Media that a contempt case could be dismissed at any time if an apology was sought from the court. – Dawn