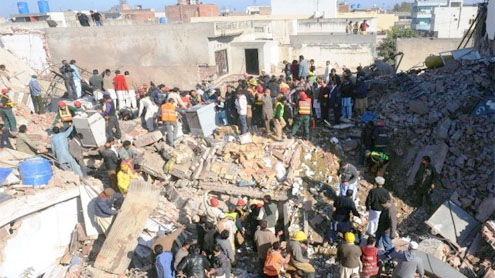 LAHORE: Rescuers believe that five people are still trapped under the debris of a factory on Multan Road which collapsed last Monday, but say it is unlikely that they will be pulled out alive.

Twenty-three people have been confirmed dead in the collapse of the three-storey building where veterinary medicines were manufactured, including 65-year-old Khursheed Bibi, whose body was pulled from the wreckage on Thursday morning.Sixteen people have been found alive in the rubble, but the last survivor found after almost two days pinned under debris, 25-year-old Ghulam Abbas, later died in hospital. Rescuers have little hope that the five people still believed trapped are alive.

“The chances are very dim,” said the official in charge of the 1122 Dirt Rescue Unit, which specialises in operations in urban areas. He said that rescuers had scanned the site with voice scanners and thermal imaging equipment but had not found any signs of life.“But you cannot rule out the possibility that there is an air pocket under the debris where someone might be alive,” he added. He said that they had started using heavy machinery to remove some of the debris starting Wednesday.

Rescue 1122 spokesman Farooq Ahmad said that the five factory workers still missing included two 12-year-olds, Musarrat and Younis, as well as Karma Bibi, 55, Shazia, 45, and Nadeem, 36. He said 75 per cent of the site had been cleared and the remaining work would be completed by Friday morning at the latest.Civil Defence officials, Iqbal Town Municipal Authority workers and workers from Falah-i-Insaniat, the charity wing of Jamaatud Dawa, are also taking part in the rescue operation.

Meanwhile, the police have yet to arrest any of the three brothers named in a first information report (FIR) regarding the case registered at Sabzazar police station, under charges including Section 302 of the Pakistan Penal Code (murder).Sabzazar Station House Officer Sharif Sindhu said that the police had raided several locations in search for the brothers, owners of the Orient Labs factory that collapsed, but had not found them.Lahore Development Authority (LDA) Director General Abdul Jabbar Shaheen has directed the officials concerned to take action against unauthorised industries in LDA housing schemes, private housing schemes and in areas controlled by the authority.

He instructed the directors of estate management, the chief town planner and the chief metropolitan planner to survey all housing schemes under the LDA’s control and issue notices to any industrial units that are violating zoning laws. If they don’t stop their illegal activities, the units may be sealed, he said. – Thetribune