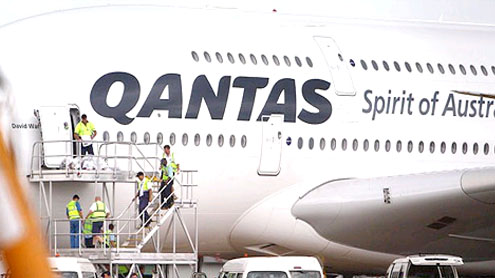 SYDNEY: Australia’s Qantas Airways said Wednesday it was temporarily grounding one of its A380 superjumbos after discovering dozens of hairline cracks in its wings during a maintenance inspection.

The Australian flagship carrier insisted the 36 small fissures posed no threat to safety and said they were different from the cracks that manufacturer Airbus found in metal brackets inside the wings of two jets last month. That discovery prompted Europe’s air safety authority to order the inspection of nearly a third of the world’s A380s.

Qantas workers found the cracks, measuring less than 0.8 inches (2 centimeters) long, in the ‘wing rib feet’ — the metal brackets that connect the wing’s ribs to its skin — after the aircraft hit severe turbulence on a flight from London to Singapore last month. The cracks were not related to the turbulence and were linked to an Airbus manufacturing issue, the airline said in a statement.

This is the second time the airline has found wing cracks in its A380s. In January, Qantas said ‘miniscule’ cracking had been found in the wing ribs of an A380 that is being repaired in Singapore following the disintegration of an engine in midflight in 2010. The airline said those cracks were also unrelated to the cracks Airbus found, and insisted they presented no safety risk.The 2010 failure was the most significant safety issue an A380 has faced since it began passenger flights in 2007, and prompted airlines to temporarily ground 20 of the planes. – Khaleejnews