by ToP
in Pakistan, Punjab
1 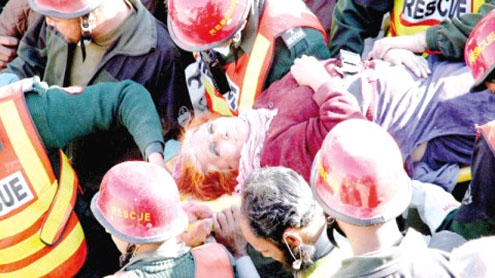 LAHORE: The death toll from a pharmaceutical factory collapse in a residential area located on Main Multan Road in the Sabzazar Police precincts rose to 22 on Tuesday, as rescuers continued to search for survivors trapped in the rubble.

The three-storey building of Orient Labs (Pvt) Limited, a veterinary medicine factory, caved in earlier on Monday after an apparent gas leak that triggered an explosion.A spokesman of Rescue 1122 said 22 bodies had been recovered on Tuesday and 15 people were recovered alive in the 40-hour-long search operation. He said rescue officials were able to communicate with six or seven people trapped in the rubble and were trying to save them.

Rescue 1122 Director General Dr Rizwan Nazeer told reporters that nine persons were reported missing and 35 people, mainly women and children, had been recovered, adding that of the 20 dead, 16 were women. He said rescue workers had recovered a 60-year-old woman alive from the rubble. He said they were not using heavy cutters in order to save lives of maximum people buried under the debris. He said rescue workers would complete the operation on Wednesday (today). Rizwan added that substandard material had been used in the construction of the factory building.Workers and volunteers used everything including hammers, axes, chisels and shovels to shift the rubble and pull out the injured, coated in dust.

A rescue worker Ahmed said they were digging through the rubble very carefully to save as many people as possible “but the death toll could rise further”.Meanwhile, the Saddar Division Police kept on searching for the three owners of the factory identified as Sheikh Zaheer, Sheikh Zafar and Sheikh Zubair. Saddar SP Shoaib Khurram Janbaz said he had constituted 6 teams to ensure the arrest of the aforesaid persons. He said police teams had conducted several raids at their suspected hideouts but the men had escaped and their houses were found locked.

He said the police had also arrested a relative and a driver of the factory owners namely Raees and Ashraf. He said they had also impounded four vehicles of the pharmaceutical company.A private TV channel, meanwhile, reported that the factory owners had fled to Dubai to escape arrest.Earlier on Tuesday, DIG Maj Mubashar Ullah also visited the crime scene, after he was appointed as an enquiry officer by the chief minister. The DIG recorded the statements of the injured victims, their families and local residents. – PT