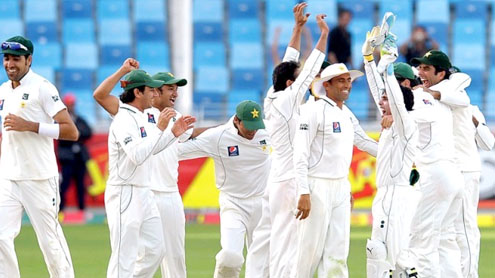 It was rare not only for being the first time in over 100 years that a team won a Test after being bowled out for less than 100 runs.Rare, for not even the most optimistic firebrand predicted a clean sweep of the world’s number one side. Rare, for a composed, calculated approach defined Pakistan’s play throughout the most controversy-free series for the team in recent memory.

Rare, for they were facing a well-rounded, superbly-skilled side that had not lost a series since 2009. Rare, because for almost six years negative headlines have followed the Pakistan cricket team from London to Jamaica to drug-testing laboratories to a roundabout in Lahore and back to London.

Rare, for this time it was all smiles – and not just from the ever-beaming Younis Khan, who took the catch of the series to snare a well-set Alistair Cook.There was much joy, as footage of spontaneous bhangra on TV channels testified. There was perhaps even more gloating, as talk of post-colonial revenge and seemingly limitless word-play on ‘whitewash’ filled the online feeds. But as the final wicket fell in a largely empty stadium in Dubai, a quiet relish filled the hearts of millions of Pakistanis watching on television.

If you had licked their hearts during the moments of crises, some of which are listed above, it would have poisoned you. Today it would taste sweeter than five cartons of mithai.Of course, the game is just that – a game. But tell that today to the chai wallah, the chief executive, the cynical cricket correspondent: he will laugh at you louder than those watching Ian Bell flap, flail and fail against Saeed Ajmal.The win has lifted a nation.

In these under-funded, over-nuanced days, this is a considerable achievement. As a metaphor for a wounded animal – some of the wounds self-inflicted, others not – which has risen with measured intelligence, reasoned aggression and, above all, grace, the success of the Pakistan cricket team should be lionised for many moons.

On the field, England had been set 324 to win. The spinners, Ajmal and Abdur Rehman, slowly spun Pakistan into hunting distance, before an Umar Gul spell set the victory parade in motion, England falling short by 71 runs.Monty Panesar was the last man to get out, unfortunately showing no sense of occasion when, clearly without a hope of overturning his lbw verdict, he suspended celebrations by ‘going upstairs’ for a television review. It was perhaps a suitable end for a series, which has highlighted the effectiveness but also lingering question marks over the DRS system. The series also had the most lbw decisions ever in a three-match series: Monty’s was the 43rd.

Pakistan are now unbeaten in seven series under Misbah ul Haq. Aside from the team, the captain himself has lived out a real-life version of the phoenix myth. Yet it is the entire squad and its backroom staff and, dare we say it, the much-maligned Pakistan Cricket Board which must be credited for rising from the ashes since those very long, very dark nights of the soul when the spot-fixing scandal broke in mid-2010. It is already one of the great sporting stories of the generation.

The sun-baked pitches of Dubai and Abu Dhabi have also proved a surprise. Many expected dull games: essentially batting paradises masquerading as cricket matches. Before the series, 0-0 was a serious prediction, perhaps even more plausible than 3-0 to Pakistan.We have all been proved wrong. Rarely has that felt so good. – Thetribune