Kayani, Pasha meet PM as tensions ease with US 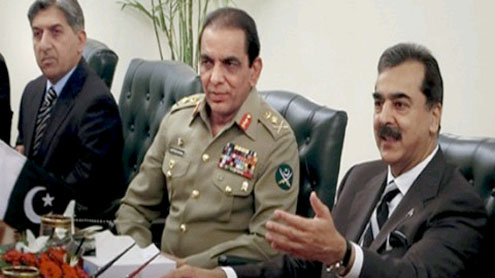 ISLAMABAD: With the United States assuring Pakistan of the key role of facilitator in peace talks between Washington and the Taliban and also expressing its willingness to give a firm guarantee that there would be no breach of its sovereignty again, the resolution of the current standoff between the two states is on the cards and they are now only days away from the normalisation of relations that came under strain after the NATO strikes on two Pakistani border posts in November last year killed 26 soldiers.

The country’s civilian and military leaders, Prime Minister Yousaf Raza Gilani, Foreign Minister Hina Rabbani Khar, Chief of Army Staff General Ashfaq Parvez Kayani and Inter-Services Intelligence (ISI) chief Lt General Ahmad Shuja Pasha held a crucial meeting here at Prime Minister’s House on Tuesday, which was focused on the current situation in Afghanistan, Pakistan’s role in the Afghanistan reconciliation process and Pakistan-US stalemate over the NATO air strikes. Since President Asif Ali Zardari left for Myanmar on Tuesday, he was not part of the important consultations at Prime Minister’s House but Gilani is said to have held detailed talks with him on the agenda of Tuesday’s meeting before his departure.

In a related significant development, US Ambassador to Pakistan Cameron Munter also called on Foreign Minister Khar at the Foreign Office before the meeting of the country’s senior civilian and military leaders and discussed with her matters pertaining to the Pakistan-US stalemate and restoration of NATO supplies. The leaders pondered the country’s role in the US-Taliban peace talks while expressing satisfaction that Washington was willing to accept Pakistan’s role as a facilitator in the talks.According to a brief official statement issued by the Prime Minister’s Office, Gilani asked Foreign Minister Khar to undertake a visit to Afghanistan as the meeting reviewed the ongoing reconciliation process there.

“The civilian and military officials also had discussions on the possibility of reopening NATO supply routes and the meeting was told that the US authorities were willing to pay tax to Pakistan on all containers going to Afghanistan through Pakistan,” said a senior Pakistani official, who asked not to be identified by name. The meeting reviewed the blueprint of Pakistani conditions for the normalisation of ties with the US, including an apology by US and NATO over the Mohmand Agency attack, assurance of no such breaches of Pakistan’s sovereignty in future, taxation of NATO containers, clear information to be given to Islamabad about the activities of Central Intelligence Agency (CIA) operatives on Pakistani soil, and limited drone strikes in future, but that too only in accordance with Pakistani intelligence information.

According to the official, the Pakistani leadership was inclined to go for normal friendly ties with the US, provided these conditions were accepted and there were also indications from Washington that it would come up with a positive response in this regard.
The official said Tuesday’s consultations at PM’s House were held against the backdrop of ongoing parliamentary review of Pakistan-US relations and the standoff between the two countries, which was about to culminate on January 30 in the joint sitting of parliament, which would approve an important resolution on these important matters.

The Parliamentary Committee on National Security (PCNS), which was tasked with formulating guidelines on Pakistan-US relations and ‘new terms of engagement’ between Islamabad and Washington on counter-terrorism cooperation, has done its job and has come up with 35 recommendations.The official said the breakthrough on NATO supplies in the shape of their restoration and settlement of the broader issue, the Pakistan-US standoff, was on the cards as the PCNS, which also had inputs from military officials and foreign policy managers, had tried to opt for a balanced approach vis-à-vis relations with the US.

He said that restoration of NATO supplies and settlement of other conflicting matters such as drone strikes and presence of CIA operatives on Pakistani soil were likely after the joint sitting of parliament scheduled for January 30.Analysts are also attaching great importance to the meeting in the context of the memogate scandal, as the prime minister had accused the COAS and ISI chief of acting unconstitutionally by submitting their replies directly to the Supreme Court in the memogate case. Sources said the meeting indicated that the strained relations between the military establishment and civilian leadership were easing. – PT