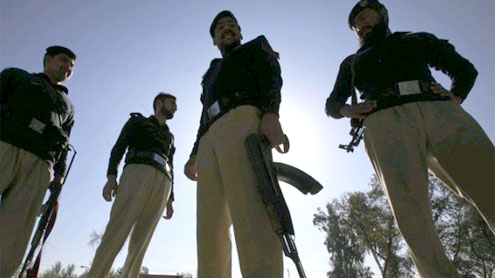 Gunmen stormed the workers’ residence on Jan. 23 in the town located in Punjab province and drove away with the two aid workers — an Italian national, and another police believe to be a German national.The provincial police chief said that the aid workers, who were working on a project in southern Punjab, are being held for ransom.

“That is all we can confirm, that they were abducted for ransom. At the moment, we cannot provide any more details or say anything about who is behind it,” Javed Iqbal told reporters in the city of Lahore.“The four suspects were under observation since the kidnapping. We traced some calls back to them,” another police official said.Criminal gangs often target foreign aid workers in Pakistan in hope of securing large ransoms for their release. Pakistani officials say militant groups such as the Taleban are also involved in kidnappings.

Such incidents and a deadly Taleban insurgency have put off long-term investors. Foreign direct investment fell 37 percent to $531.2 million in the second half of 2011 from $839.6 million in the final six months of 2010.Gunmen kidnapped a British doctor, working with the International Committee of the Red Cross (ICRC), in the southwestern city of Quetta on Jan. 5.American aid worker Warren Weinstein was kidnapped from the central Pakistani city of Lahore in August last year. Al-Qaeda claimed responsibility for Weinstein’s abduction in December.In July, a Swiss couple was kidnapped from the southwestern Baluchistan province by the Pakistani Taleban. – Arabnews