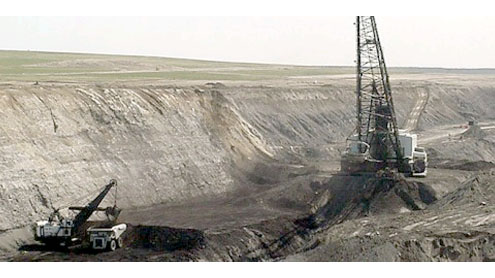 Karachi: The country can easily meet the expected demands of around 2200 MMCFT gas by 2015 through the “Underground Coal Gasification (UCG) Project” through the investment of only over $1 billion.

The project, which has successfully started producing gas recently, has proved to be the only solution to bridge the gap between demand and supply of gas in the country on a short term basis by utilising indigenous resources at lower costs.During a visit to the UCG project at Tharparker, Sindh recently, Profit observed that the government funded pilot project, started under the supervision of the renowned scientist Dr Samar Mubarakmand, was successfully producing gas as it has almost completed the first gasifier at Thar, which is enriched with the reserves of 175 billion tonnes of coal.

The only Block-5 (64 Sqkm) of Thar allocated for the gasification project could meet the energy demands of the country for over 30 years as it has the reserves of 1.4 billion tonnes. The pilot project, initially aimed to generate gas for producing 100 megawatts, is now being planned to be extended from the approved 18 to 84 gasifiers. The needed $1.2 billion fund for the proposed 84 gasifiers is likely to be approved by the government as the matter, according to sources, is scheduled to be discussed soon.

Talking about the recent developments at the project, Dr Muhammad Shabbir Managing Director of UCG project said that despite much criticism and hue and cry over the gasification project, the team led by Dr Samar Mubarakmand has succeeded to produce gas through the indigenously designed project without any foreign funding.

“As mining needs heavy investment besides the technical and processing hindrances in the area, the UCG was a better alternative to explore the huge reserves of coal”, he said. According to the MD, a gasifier could easily produce the required gas for at least 10 years while the whole setup could be relocated in the area with less expenditure, besides the project has no environmental implications as compared to mining.Through the produced gas, the government was going to purchase some engines of 1.5 MW each to use the gas for generating power and the project was expected to be able to generate at least 100 MW by the mid of next year.

According to Muhammad Shabbir, the demand of gas in the country was expected to be 2200 MMCFT by 2015 as compared to the current demands of 1500 MMCFT against 5500 MMCFT. To meet the expected demand almost 84 gasifier were needed to be established at the side as a gasifier was estimated to produce at least 26.5 MMCFT gas. Currently only one gasifier has started producing gas while another 17 units are in the pipeline. He informed that at least 49 to 50 gasifiers would be established in 1 Sq km of the Block-5 which was stretched over 64 Sq km. One gasifier was being built at the cost of Rs1.2 billion making the total cost of 84 units Rs101 billion or $1.12 billion.

Almost 150 personnel were currently working at UCG project out of which 62 employees were from Sindh and 30 to 32 workers belonged to Tharparkar. Talking about the benefits of the project for the locals, he said that maximum job opportunities were being given to the locals while they would also be given preference for supply of water, gas and electricity through the project. In reply to query, he rejected all concerns shown from various corners over the project saying that there were no human or environmental hazards in the project.To another question, he said, the present government was serious about the project as it has provided the required facilities to UCG.

It is worth mentioning here that the first test burn at the underground coal gasification project was made in December 2011 after completing the first gasifier and civil works with the availability of $9.22 million for the project. The completion of the gasifier also involved over 36,000 feet of drilling and 18,000 feet of steel-casing and other engineering works. On the other hand, the oil importers lobby and others, sources claimed, have also started their activities to fail the already succeeded project as the gas produced after the new developments could not only reduce the import of oil but also produce diesel, car fuel, waxes, Naptha and others. – PT

NAB to act against top generals in NLC case