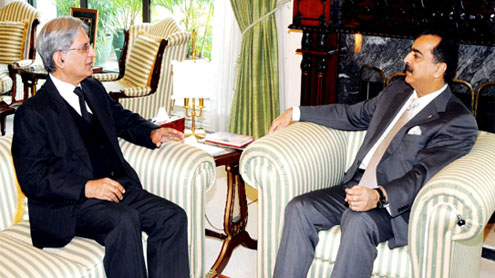 ISLAMABAD: Tuesday was yet another eventful day in the capital. By the evening, Prime Minister Yousuf Raza Gilani had chosen none other than Aitzaz Ahsan as his counsel to represent him in the Supreme Court to contest the contempt notice.

And in the morning, the apex court suspended the licence of Babar Awan for failing to respond to its contempt notice.Prime Minister Gilani is facing contempt of court charges for not writing a letter to the Swiss government to reopen graft cases against President Asif Zardari.The Supreme Court in a judgment in December 2009 had directed the government to start proceedings against President Zardari but the prime minister refused to comply on the pretext that Mr Zardari, being the head of state, enjoyed immunity.

Analysts here are of the opinion that the choice of Mr Ahsan as his lawyer by the prime minister indicates that saner elements in the PPP are now being heard by the party leadership seriously.More importantly, Mr Ahsan, who is known for expressing his opinion regardless of party policy on various issues, has accepted the assignment.A brief press statement issued by the media wing of the prime minister’s secretariat confirmed a meeting between Mr Ahsan and Mr Gilani at the prime minister’s house on Tuesday.

“In the meeting, it was agreed that Barrister Aitzaz Ahsan would appear in the Supreme Court of Pakistan along with the prime minister as his counsel on January 19,” said the statement.The dovish lawyer has always commanded respect in legal circles for his convincing and calm comments in courts. And even at public rallies, Mr Ahsan is not the one who would arouse people unnecessarily.Therefore, it is said, Mr Ahsan’s selection is a reconciliatory gesture from the government towards judiciary after weeks of tensions.

Mr Ahsan, who was a key leader of the lawyers’ movement for restoration of judiciary, has repeatedly said there is nothing wrong in writing a letter to the Swiss authorities for reopening cases against President Asif Zardari.He is of the view that both national and international laws provide immunity to a sitting head of the state against prosecution.Now it will be interesting to see whether Mr Ahsan, who had served as a cabinet member in both PPP governments of Benazir Bhutto, would follow his party’s line of not writing the letter to the Swiss government.

During a recent TV interview President Zardari said the PPP government would never write the letter. The president termed the move as putting the late BB’s grave on trial.Talking to Dawn, PPP Information Secretary Qamar Zaman Kaira said the selection of Aitzaz Ahsan as prime minister’s chief counsel would go a long way towards defusing the perceived tension between the judiciary and the executive.

“Mr Ahsan is a senior party leader who has gracefully accepted the request of the prime minister to represent him in the court,” said Mr Kaira.A confident sounding Mr Kaira said the PPP would be the last political party to opt for a confrontation between institutions and expressed the hope that things would improve with the appearance of Barrister Ahsan in the apex court on Thursday. – Dawn

Stoppage of containers to cause food shortage: Afghan minister

Stoppage of containers to cause food shortage: Afghan minister