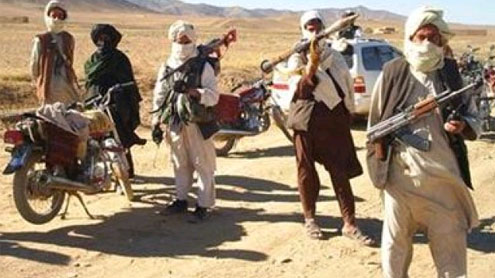 QUETTA: In one of the deadliest-ever attacks on security forces in the volatile Balochistan province, suspected Baloch insurgents on Wednesday ambushed a paramilitary convoy near Turbat city, killing 14 troops, including two officers.

Armed men fired grenades at two vehicles carrying troops of the paramilitary Frontier Corps (FC) in the mountainous Wakai area near Nawano check-post, about 50 kilometres from Turbat city, sources said.“The attackers first fired rocket-propelled grenades (RPGs) at the vehicles and then opened fire on them,” one source told The Express Tribune by phone from the region.The troops were engaged in a mine-sweeping operation in the region when they came under attack, sources said.

The sudden attack was so intense that the paramilitary troops couldn’t retaliate. As a result, all 14 troops, among them two Junior Commissioned Officers (JCOs), travelling in the two vehicles, were killed.Soon after the attack, a heavy contingent of FC and law-enforcement agencies was rushed to the site which engaged the attackers in a firefight. However, it wasn’t immediately known if any of the assailants was killed or injured in the retaliatory attack.The bodies of FC troops were shifted to the district headquarters hospital in Turbat.

According to television report, the outlawed Baloch Liberation Front (BLF) has claimed responsibility for the deadly ambush.Baloch insurgents have been fighting a protracted insurgency in the province to demand more autonomy and control over the natural resources of their impoverished region.The insurgency became more deadly following the killing of Baloch chieftain Nawab Akbar Bugti, who was also the chief of Jamhoori Watan Party, in a military operation in the Taratani caves of Kohlu district in 2006.

The Pakistan Peoples Party-led coalition government has announced a package, Aghaz-e-Huqooq-e-Balochistan, to address the sense of deprivation among the people in the largest province of the country.However, this delayed move has done little to pacify the Baloch insurgent groups who, it appears, do not want a political solution to the problem.They blame the military for continuing detentions and subsequent killing of political activists in an attempt to muzzle dissenting voices.

Rights groups have also expressed concerns at growing violation of human rights and continuing ‘disappearances’ of political workers in the province.On his recent visits to Karachi and Quetta, opposition leader Nawaz Sharif admitted that successive governments had done injustices to the Baloch people. But he promised to ‘fight the Balochistan case’, if his party was voted to power in the upcoming parliamentary.

In a meeting with Sharif, veteran Baloch politician Sardar Ataullah Mengal made an ominous statement: “There will come a point when Balochistan’s youth will not listen to me or anyone else.” He added that “they (the Baoch youth) have decided that they cannot be a part of a country that treats them like this.” – Thetribune