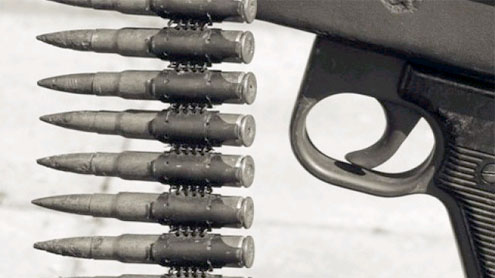 KARACHI: A policeman outside the US Consulate accidentally shot himself on Monday with a rifle handed to him by a constable who needed to go to the bathroom.

ASI Anwar Sheikh, 41, was deputed at the picket No. 7 on Mai Kolachi Road. His junior, constable Bashir, handed Sheikh his sub-machine gun (SMG) because he wanted to go to the bathroom inside the consulate which does not allow any weapons, said SHO Abdullah Ghumro. Bashir said that soon after he left the picket, he heard a gunshot and found that Sheikh was dead when he hurried back. He was shot in the chest and died on the spot. The body was taken to Jinnah hospital.

The victim worked at the foreign security cell and had been posted at picket No. 7 for the last six months. He lived in Soldier Bazaar and leaves behind seven children.SHO Ghumro said that the shooting appeared to be an accident and the police were questioning constable Bashir and another policeman, Rana Amir, who was also deputed at the picket.Separately, a renowned nauha khwan or dirge orator, and a member of the elders wing of the Muttahida Qaumi Movement, Syed Qalbe Abbas Rizvi, died at Abbasi Shaheed Hospital on Monday. Rizvi was shot on Saturday night by armed motorcyclists when he was standing in front of Al Mustafa General Store in Sector 7A of Surjani Town.

The Surjani police said that the victim also lived in Surjani Town. They suspect that the murder was an act of sectarian violence. Rizvi’s body was taken to Imambargah Khairul Amal at Ancholi. He was buried at Wadi-e-Hussain graveyard off the Super Highway. Danish, the victim’s son, registered an FIR with the police against unidentified men.

Police arrest street crime masterminds.PPI reports that the Shah Faisal police arrested two masterminds of street crime in their area on Monday. SHO Inspector Muhammad Sarfraz Gondal raided Shah Faisal Colony No 1 on a tip-off and arrested two culprits, Raza Ahmed and Aman.They had two pistols, two magazines, 10 bullets, a snatched motorcycle, eight mobile phones and looted cash with them. The police said that they were masterminds of a gang involved in more than 200 street crimes in the city. – Thetribune

Question of merit: Political pressure on KU to give activists 390 seats