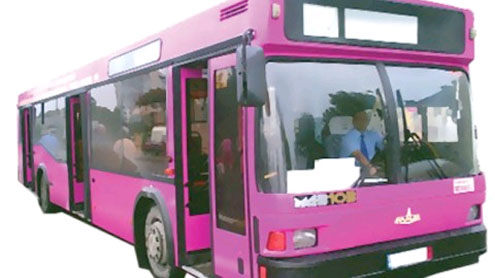 The buses are an effort to offer women harassment-free travel, said Muhammad Dastgir Baloch, chief operating officer of the First Bus Service, which is behind the Pink Bus Service. He said the buses would run from 6:30am to 7:30pm. One of the buses runs on CNG while two run on diesel.The buses ran on Route 33 from the General Bus Stand (Lorry Adda) to Green Town, Route 22 from Jallo Mor to Thokar Niaz Baig, and Route 1 from RA Bazaar to Sanda. They charged passengers between Rs15 and Rs35, with students paying a flat rate of Rs10.

Baloch said that the three buses made three round trips on Thursday. The bus on Route 1 got 52 passengers. First Bus Service officials got off the bus at stops to inform female passengers about the exclusive service. “It was the first day so most people didn’t know about it,” he said.He said that if successful, the company would expand the service. “We could dedicate 20 per cent of our buses for women,” he said.

Amna, a Punjab University student waiting at a bus stop, appreciated the move, saying young women had to daily fight off unwanted attention from men.Ramsha Naeem, another student, also welcomed the service but said that three buses was far from enough. “I waited over 30 minutes but did not see a pink bus,” she said.Nasir Mumtaz, assistant manager of the gender empowerment and social advocacy programme at the Kashf Foundation, welcomed the Punjab government initiative. He said the government should add more buses to the transport network and encourage the private sector participation in the sector.

He said the government should also train female drivers for the service.The First Bus Service has over a hundred buses including 38 CNG buses.The Pink Bus Service was inaugurated by PML-N MNA Hamza Shabaz at Club Chowk. He was accompanied by Advisor to the Chief Minister Begum Zakia Shahnawaz.Shahbaz, speaking to reporters at the inauguration ceremony, said that if the pilot project were successful, female-only buses would be launched on more routes in the city. He said that 550 more buses would be brought to Lahore in March. – Thetribune