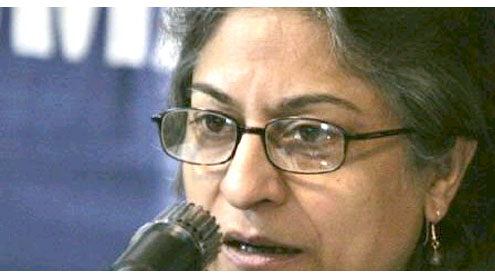 ISLAMABAD: As the memo issue enters into a decisive phase with the appointment of a high-powered judicial commission to investigate it within four weeks, Asma Jahangir, the counsel for former ambassador to the US Hussain Haqqani, on Sunday dissociated herself from the proceedings of the commission, saying she would not appear before the commission as she doubted its neutrality.

Talking to Pakistan Today, she said it was the commission of the Supreme Court’s will, in which judges of its own choice were included. At the same time, she said, the commission was tasked to complete the probe within four weeks at the Islamabad High Court building and she was unable to stay in Islamabad for such a long time. However, she said she would not disassociate herself from advocating her client. “I will continue as counsel for Haqqani,” she said, added how could she trust the neutrality of such a commission formed by the Supreme Court, which was itself under the influence of the “establishment”.

Just after the SC’s short order on the memo issue came on Friday, Asma had expressed disappointment over it, questioning whether the court was there to serve and protect the rights of the public or the establishment? Talking to reporters, she had said it was a dark day for the judiciary and she was forced to think whether it was the judiciary of the people or the judiciary of the establishment. She had warned that the decision would haunt the petitioners too and then they would recall her statement.

Asma had regretted that the civilian authority had come under the military authority. “I was expecting at least one dissenting voice against the judgment, but it did not come,” she said. Expressing disappointment over the order, Asma had said she did not see any ray of hope in the court now. She had regretted for having struggled for the restoration of the judiciary, saying the court’s decision had compromised a person’s right to justice, contending that the judgement was not in accordance with the law. However, at the same time she had accepted it.

Asma’s contention was that the court had given the petitioners more relief than they had asked for and the court had given national security more priority than the fundamental rights of an individual.She said she would wait for the detailed verdict and would then decide if she would file a review petition against the court’s short order.Meanwhile, in an interview with DawnNews, Asma said Haqqani feared that the spy agencies might force him into giving a statement. “This fear was the reason behind the former ambassador’s stay at the Prime Minister’s House,” she said.

She said the Supreme Court’s decision on the petitions over the memo issue was a victory for the country’s establishment. She said the law was being used to transform the country into a “security state”. According to DawnNews, she refused to continue as counsel for former ambassador Haqqani in the memo case.The three-member commission on the memo case constituted by the Supreme Court on December 30 will meet at 11am today (Monday) in the Islamabad High Court.The commission is headed by Balochistan High Court Chief Justice Qazi Faez Isa and includes Islamabad High Court Chief Justice Iqbal Hameedur Rehman and Sindh High Court Chief Justise Mushir Alam. – PT