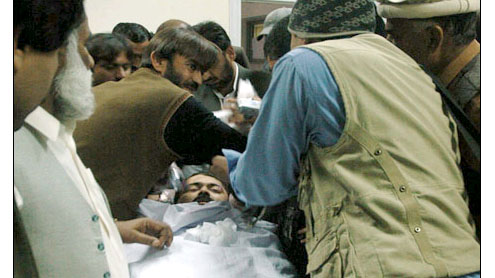 QUETTA: Dr Baqar Shah, the police surgeon in Balochistan, was shot dead by two unidentified armed men on Sabzal Road on Thursday afternoon when he was returning home from the Bolan Medical College Teaching Hospital.

Dr Baqar Shah was the starred witness of the Kharotabad incident where five Chechens and Russians were killed by the police and Frontier Corps on May 17.According to initial reports, he received five bullets, all in his head and chest, making the incident instantly fatal. He died before he was taken to BMC Hospital or provided any medical aid.The reports suggested that the armed assailants were sharp shooters and fired from a very close range with an aim to shoot and kill their victim, one doctor at the hospital told reporters.

Both the armed assailants were on motorcycle and escaped after firing a volley of shots on Dr Baqar Shah. A large number of doctors and para-medical staff gathered at the emergency ward where body of Dr Baqar Shah was brought for a post mortem. The crime seen was cordoned off by the police and other members of the law enforcing agencies preserving the available witness from the spot. The Pakistan Medical Association, Balochistan Chapter, had strongly condemned the murder of the eminent surgeon in broad daylight.

The PMA had convened an emergency meeting to review the situation and formulate a strategy following the murder of doctors and surgeons in a series in recent months.Earlier, there was a massive protest from the people in the medical profession on brutal murder of Dr Mazhar Baloch, the former president of the Balochistan PMA and an eminent orthopaedic surgeon of Balochistan.It was the second attempt on the life of Dr Baqar Shah. Earlier, a group of armed men tried to whisk him away from a roadside, which he resisted.

He identified them as policemen and he had used to deal with them off and on handling medico-legal cases as competent Police Surgeon.Quetta Capital City Police Officer (CCPO) Ehsan Mehboob told the media that it was an act of terrorism and police are engaged in collecting evidence.Balochistan Chief Minister Nawab Aslam Raisani strongly condemned the incident and ordered a probe into the murder.

Senator Haji Lashkari Raisani said it was the clear failure of the local administration and the law enforcing agencies that a brave doctor was killed in a cold blood. “He was receiving threats after compiling post mortem reports. The government should properly investigate the killing and bring the culprits to book,” he told the media. – Dailytimes