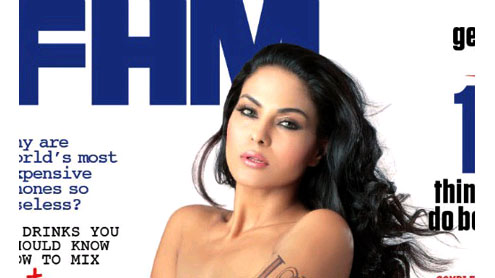 MUMBAI: Pakistani starlet Veena Malik, who made a splash in the Indian showbiz industry last year with her sleazy stint in reality TV ‘Bigg Boss 4,’ regrets the latest controversy that stirred her nation.

The actress from across the border has confessed that she has made a mistake by posing topless for the magazine but has categorically denied going nude. She had indeed covered her modesty with her arms and was wearing a bikini bottom while shooting for FHM magazine.However, according to her, the magazine cheated on her by tampering with her images.

Talking to a daily, Veena said, “Yes, of course, both the images were morphed. My upper portion was covered with tattoos. I think if I could rewind this time, I would like to delete. I feel cheated.”“But we all make mistakes, I have made a mistake, learned from it and want to move on,” she added.Reportedly, Veena’s father had disowned her following the news that shamed him utterly and also called in for severe action against her. Her subsequent participation in ‘Swayamwar’ forced many Islamic bodies to issue ‘Fatwa’ on her for disrespecting their community.

“It has been tragic and traumatic, really sad. It has been very difficult,” the tainted actress said.Most of her actions have made news and it is believed that she is a desperate publicity seeker!Well, we really wonder if you sincerely repent for the controversy Ms Malik! – Geotv