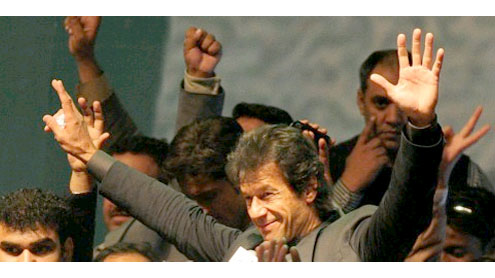 ISLAMABAD: With Pakistan Tehreek-e-Insaaf (PTI) chairman Imran Khan setting his eyes on the restive Balochistan with an announcement to hold the party’s next public procession in Quetta on March 23, the Pakistan Muslim League-Nawaz is dogged by internal bickering in the province and its incumbent chief organizer, Khuda-e-Noor, is considering joining Imran Khan.

Although PML-N central leadership has decided to complete party organisation in provinces pending since July 27, intra-party rifts are at their peak in Balochistan and may push a number of PML-N provincial leaders and workers toward the PTI. Talking to Pakistan Today, Khuda-e-Noor said he and a number of party workers had serious reservations over the party’s policies. “I have handed over a paper carrying my concerns about policies of the Sharifs … I will wait for Nawaz Sharif’s response before taking any decision,” he added.

He said PTI leaders, including Khurshid Mehmood Kasuri and Javed Hashmi, had asked him to join the party. “If my reservations are not addressed, I may think of joining the PTI,” Noor added. Criticising the PML-N top command, he said the party had announced provincial elections on January 6, “‘but how will the election be held wihout elected or nominated provincial councils?”

“Under the PML-N constitution, there must be 100 provincial councils in Balochistan to elect provincial office bearers,” he added. Communal differences among provincial leaders are also playing a part as a source said, “In Balochistan, party’s Baloch workers support a Baloch as provincial president, while Pashto speaking PML-N workers want a Pashtun.

If the PML-N top command chooses a Baloch, Sardar Sanaullah Zehri or Changez Marri will be elected Balochistan president, and if the Sharifs prefer a Pashtun, Khua-e-Noor may be the next provincial president.” Sources said the the provincial president would likely be a Baloch with a Pashtun secretary general. – PT