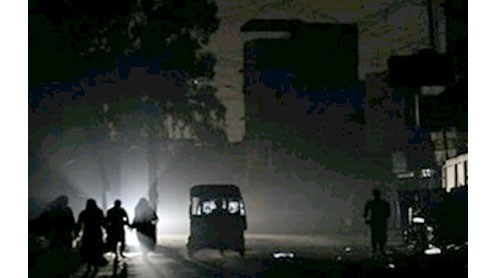 LAHORE: With about 50 per cent less electricity generation than the actual demand, the National Grid is facing more than 5,000 megawatt (MW) shortfall and the load shedding is plaguing the urban and rural areas of the country.

The Pakistan Electric Power Company instead of explaining the real situation has became silent and even refusing to share the data with media about the demand and supply gap. The Company was in practice of making public the electricity situation on daily basis since two years.

Sources claimed that the hydel generation was mere 1,000MW and the GENCOs, IPPs and RPPs were generating mere 6,000MW for the energy basket due to the shortages of fuel for the power plants. The demand, they added, was standing at more than 12,000MW. Thus, according to the sources, the National Grid was facing above 5,000MW shortfall and the cities and villages were under the grip of 10 to 12 hours shutdown. There are reports that the LESCO, IESCO, FESCO, GEPCO and MEPCO, five electricity generation companies of Punjab, are conducting 12-hour outages in their rural limits due to vast gap between their demand and supply positions.

The consumers in urban areas are facing 10-hour load shedding with continuous spells of two to three hours  in one go. The situation has become worst in interior Sindh, Balochistan and Khyber PK, where the people ‘enjoy’ the electricity facility only for six to eight hours in 24 hours.The LESCO has made the City’s life very difficult, thanks to the Company’s old dated transmission system and injustice being made in electricity distribution in poor and rich areas.

Sources said that the Company was conducting 10-hour load shedding with the spells of two to three hours in underdeveloped and poor localities while the grid stations in Model Town, Gulberg, DHA and other posh areas were conducting not more than six hours shutdown. For example, there was 10 hours load shedding in New Ghazi, Fateh Garh, Bata Pur, PWR, Mozang, Gari Shahoo areas while the residents of Model Town were facing six hours outages, the people of the said areas told TheNation.

There was no load shedding schedule and the lights became off whenever the LESCO wanted, said a resident of Mozang. The consumers said that low-pressure of gas for households especially at the time of cooking and electricity blackout at the time when the children went schools and during evening hours were badly hitting them.

Meanwhile, the LESCO’s consumers on Monday staged a protest demonstration against inclusion of fuel adjustment charges (FAC) in electricity bills. Dozens of consumers became angry and started chanting slogans against the LESCO’s management at Rewaz Garden when the Company’s officers refused to remove FAC from their bills.They said that the Lesco was not obeying the LHC’s orders about FAC. The court had exempted the domestic consumers from FAC. While the Company was in a view that the charges were being included by the Nepra and the Lesco  has noting to do with the FAC.