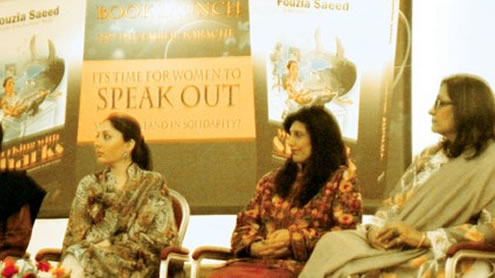 KARACHI: After the best-selling book Taboo, Dr Fouzia Saeed’s book ‘Working With Sharks’ is expected to break records in book selling. The book was launched in Islamabad and later in Karachi on the national workingwomen’s day.

Published by Sanjh Publishers based in Lahore the book grabs attention first because of its cartoon cover. Fans of Taboo have gathered at the series of launches in different cities. The book is about sexual harassment and is an autobiography of the author as a workingwoman. She has revealed her personal struggles of one case, which she filed with ten other women against one man who sexually harassed all of them in the Pakistan office of United Nations (UN). The first ten copies of the book were auctioned through a silent bidding process. The ten highest bids were announced at the launch made by those who bought the first ten copies of the book. The highest bid, which got the first copy of the first edition was for Rs 125,000. This was collectively made by women working in the UN system in various UN organisations from Pakistan, USA, Switzerland, Yemen, Bosnia, Libya and Italy. This was a gesture of solidarity from the women of the UN and they had requested to send this first copy to the Secretary General of the UN.

The second copy of the book was sold for Rs.115,000 to Naveed Husain a senior UN official heading the UNHCR office in Yamen. The third copy was sold for Rs 100,000 to Engro Corporation in Pakistan, headed by Asad Omar. All ten copies had bids from all over the world showing that Dr Fouzia Saeed’s work and writings have a strong support. She herself, talking at the occasion, described this symbolic auction as a beginning of a major change were members of the society will stand in solidarity with a woman who wants to speak out against such crimes as opposed to the tradition of stigmatising her. She said from this day onwards our Pakistani society would have to make space for women to speak out and stop stigmatising them. She donated this money to start a campaign for this cause. Sahira Kazmi, a speaker at the launch held at Marriott said that she herself experienced resistance and retaliation when she used to make plays on women’s issues in her earlier career.

Tina Sani shared the importance of the movement that got the anti-sexual harassment legislation passed. Sharmila Farooqi expressed her appreciation for the brave effort and said this case was a landmark in getting this movement started. Adnan Malik, a model, film maker and a role model of youth said that men and women both will have to work together and bring about changes in everyday life to change the fabric of the society. The author shared that she would have a launch of the book in Lahore on Dec 26 and later will go on a book tour at different universities in Karachi Lahore and Islamabad. A professor at the launch said every student and every girl who intends to work, as a professional should read this book. The launched ended with book signing. – Dailytimes