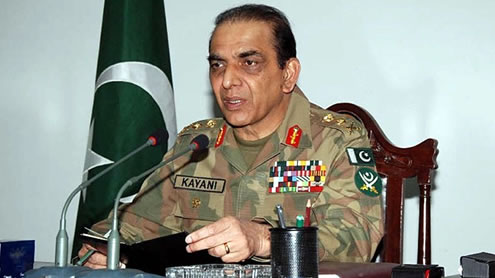 RAWALPINDI: Chief of the Army Staff (COAS) General Ashfaq Parvez Kayani on Friday reiterated that the Pakistan Army has and will continue to support democratic process in the country.

Replying to a question, the Chief of Army Staff dispelled the speculations of any military takeover and said “these were misleading and were being used as a bogey to divert the focus from the real issues.

”Addressing the troops during his visit to the Forward Posts of Mohmand and Kurram Agencies on Thursday, he emphasized that the issues of national security needed to be considered on merit alone.“Irrespective of all other considerations, there can be no compromise on national security,” said Chief of Army Staff as quoted by ISPR in a press release issued here on Friday.

“The army is fully cognizant of its constitutional obligations and responsibilities,” he said.General Kayani appreciated the Armed Forces of the country for their successes achieved under trying environment and the sacrifices made in the process.“No one could put a price tag on the sacred blood of Shuhada of the nation,” the Chief of Army Staff said in a firm tone.

The men and women of Pakistan Army are performing their duty of defending their motherland in accordance with the oath they took, he said, adding that they would continue to do so with the support and prayers of their countrymen, regardless of the cost. – Nation