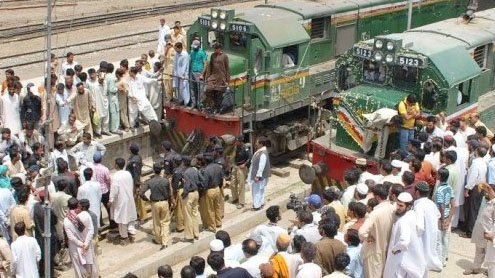 ISLAMABAD: Despite having losses, the Ministry of Railways is seriously considering the proposals to extend the railway network to Afghanistan and China.

Through another question, the minister informed the Lower House that at present 86 trains are being plied in the country, while 76 pairs of trains were discontinued since March, 2008 due to very low patronage and shortage of locomotives.

About total loss to the PR in the torrential rains and un-precedented floods in the months of July and August, 2010, the Railway Infrastructure (including bridges, track and buildings) was badly damaged in all the four provinces of the country. The total value of assets damaged during the flood of 2010 was estimated at to Rs 6.395 billion. While in 2011 food, Pakistan Railway suffered a loss of Rs 247.237 million mainly in Province of Sindh.

Keeping in view huge losses to the ministry of PR, the minister said Pakistan Railways is keen to encourage Public Private Partnership (PPP). Following projects under Public Private Partnership are in footing in Pakistan.Pakistan Railways is offering its track infrastructure to Pakistani private parties for use of their own trains in lieu of payment of Track Access Charges. The Private Parties, operators may procure rolling stock from anywhere. Rehabilitation of locomotives through PPP

Due to acute shortage of funds, the private parties have been invited to invest in repair of 200 inoperative locomotives on the basis of PPP. Organisations including National Logistic Cell (NLC) have shown interest to rehabilitate the locomotives through PPP arrangements. A draft agreement with them has been prepared and is in the process of finalisation.

An overnight ‘Business Train’ consisting of 13 coaches which includes nine air-conditioned coaches, two power vans, one luggage van and one brake van will run on daily basis between Lahore and Karachi Cantonment. This train is going to be outsourced M/s Four Brothers, who will invest Rs 225.786 million in this train, the minister maintained. The investments made by the party will become property of the PR upon lapse of the agreement. To this effect a MoU has been signed between Pakistan Railway and M/s Four Brother International (Private) Limited.

The ministry of railways has also taken several step to encourage Public Private Partnership, which include Luggage Vans of six pairs of trains have already been outsourced while outsourcing of luggage vans of three pairs of trains is under process.Outsourcing of 45 powers plants and their proper maintenance and fitness is in process.Contracting out dining cars of all trains is in process, which will ensure greater revenue.Under PPP, a container terminal at Prem Nagar station has been set up. Moreover, Pakistan Railways is setting up Dry Ports at Pir Mukhtar Wala in Multan Division and Azakhel in Peshawar Division on joint venture basis with Private Parties