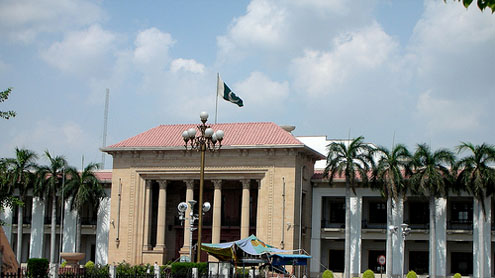 LAHORE: Pakistan Muslim League-Nawaz (PML-N) imposed a ‘parliamentary curfew’on the treasury members during the Wednesday session in Punjab Assembly (PA) to maintain the quorum and to counter any move from the opposition, Daily Times learnt.

According to sources, the ministers as well as the unofficial “Chief Whip” of the treasury benches and Chief Minister’s Principal Secretary Dr Tauqeer Shah verbally directed the assembly staff to keep an eye on the treasury members who, according to him, were likely to skip the session. The members were instructed to stay in the House till the assembly business was completed. The PML-N government was very much interested in legislation of about 20 amendment bills so its ministers as well as Dr Tauqeer tried to maintain the quorum in order to avoid getting embarrassed in front of the opposition over incomplete quorum, and it is interesting to note that they succeeded in their goal.

On Wednesday, a special breakfast and launch was also offered in the assembly cafeteria for the treasury members who were present in the assembly. The session started at 10:25am and was adjourned at 2:30pm after completion of the agenda and passage of 10 bills. For the time the session continued, Dr Tauqeer Shah paid a hectic duty at the entrance corridor inside the assembly building to keep a watch on the members.

On the other hand, it was the first time that Punjab Law Minister Rana Sanaullah also took up the matter of treasury MPAs attendance in the House and brought the members in the House after pointing out of the quorum by the opposition. A provincial minister, confirming the orders in this regard, said that though they had tried their best to keep the number of members intact in the House, it was still hard to keep them bounded. – Dailytimes