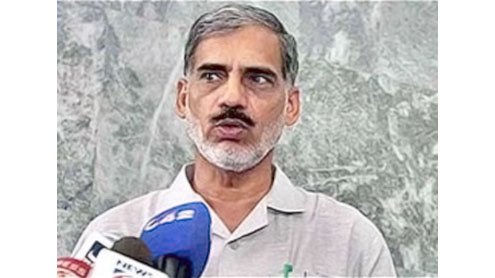 Sources privy to the development informed TheNation that former Indus Water Commissioner (IWC) could not travel abroad as the Federal Government, in order to inquire about his alleged severe negligence in the construction of Indian Nimoo-Bazgo Hydropower Project, has included his name in the ECL now.

It is also learnt that an inquiry had been initiated against the former IWC who ostensibly could not raise the serious reservations and concerns of the country in time regarding much-controversial Indian hydropower project and on the basis of those charges remaining salary and pension of Syed Jamaat Ali Shah has been stopped now.

Sources further said that due to alleged negligence by the commissioner, India got approval regarding carbon credit from the United Nations and has completed 90 per cent work on the said 45MW hydropower project including construction of dam, coffer dam, diversion channel, power house and other facilities on the Indus River which would be operational by July 2012. However, a final action against Syed Jamaat Ali Shah would be taken after the nod of Establishment Division, sources added.

So it is possible that India would be able to operationalise the project. Water and Power Ministry has already given its approval on a summary the recommendations for an IWC seeking to approach International Court of Arbitration (ICA) against sheer violation of IWT allegedly committed by India in its much controversial Nimoo-Bazgo Hydroelectric Project and had sent the summary to the prime minister for final nod. The Indian government has so far not removed the five objections raised by Pakistan mainly on the pondage level, spillways, silt flushing outlet and others.

It is relevant to mention that a delegation headed by the Acting Indus Water Commissioner on October 2 visited the site of Nimoo-Bazgo Hydroelectric Project and found that Indus Basin Water Treaty 1960 was being violated. Nimoo-Bazgo Power Project situated at village Alchi, 70 kilometres from Leh in the Indian Occupied Jammu and Kashmir, was initially planned to generate 45MW hydropower electricity.