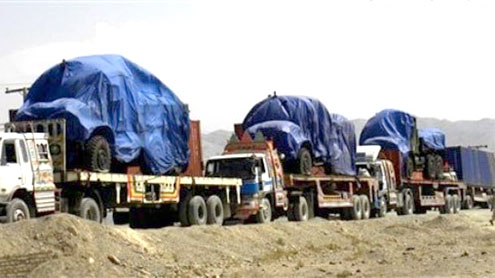 ISLAMABAD: Showing disinterest in mending fences with “allies”, Pakistan Army’s top brass on Wednesday denied having taken up the Nato supplies blockade issue with the Western military alliance while confirming contacts with its top commander.

The development forecasts that the ice of hostility between Pakistan and North Atlantic Treaty Organisation (NATO) appears to have stood far from melting, for the time being at least, till the surfacing of Nato investigation findings, scheduled next Friday, into the border attack incident. The probe Pakistan refused to become privy to, was launched following the country’s protest over the killings of its two dozen soldiers when Nato gunship choppers pounded shells at two Pakistani pickets in Mohmand Agency last month.The Nato chief in Afghanistan General John Allen on Tuesday disclosed having contacted Pakistan Army chief General Ashfaq Parvez Kayani a day earlier while hoping that coordination between both the sides would resume.

General Allen told reporters in Kabul, he sensed progress in restoring border coordination with Pakistan in order to move on. He stated that resumption of Nato supplies was not figured in the particular telephonic conversation.During his ongoing visit to Afghanistan, the US Defence Secretary Leon Panetta also hopes mending ties with Pakistan despite prevailing hostility. Panetta had also talked to Kayani by phone on Tuesday.Responding to the reports of reconciliation between the two sides, Pakistan Army said in a statement yesterday, “During telephonic conversation between General John Allen and General Ashfaq Parvez Kayani on 12 December 2011, the issue of reopening of Nato supply route never came under discussion as has been highlighted in the statements of ISAF commander.

It would be appreciated that unnecessary speculation in this regard is avoided.” Even though General Allen had clarified of having not discussed Nato supplies blockade with his Pakistani counterpart, Pakistan military’s clarification, according to official sources, is to be perceived as a gesture to affirm army’s firm stance over reviewing military cooperation with the US while turning down the reconciliation reports.When contacted, Nato-led International Security Assistance Force (ISAF) Military Spokesperson in Kabul Brigadier General Carsten Jacobson did not comment on recent contact between top officials of Pakistan Army and Nato while suggesting this correspondent to go through the contents of General Allen’s briefing. “Everything is there in the briefing that’s not classified at all.

You better read it. The general has answered in detail the reporters’ questions and I don’t need to elaborate on it any further.” Asked to comment on Pakistan Army’s clarification regarding General Allen’s telephonic contact with General Kayani, the spokesperson said, it was not for him to comment on it.

“Things are in the process of settling and we hope that the coordination between the two sides would improve. There’s been a pending investigation, efforts for resuming cooperation and all that. It’s not the right time to divulge anything that…. That lets say is classified till anything conclusive comes out and it’s the right time to speak on things.” According to military sources, General Kayani is likely to meet his commanders in the Corps Commander Conference scheduled sometime this week.

The military top brass is likely to cling to its toughened stance on future strategic engagements with the US. The decisions taken in political moots, diplomatic meet-ups and military briefings sound unanimous to transpire that Pakistan’s power centres have a smooth sailing for reviewing engagement terms with the US. While Pakistan wants the US and Nato apology for last month’s attack which it terms as unprovoked and pre-planned, along with written assurances not to repeat this kind of event again, deadlock persists as the US and its Western military alliance refuse to render any apology before the completion of pending probe. – Nation