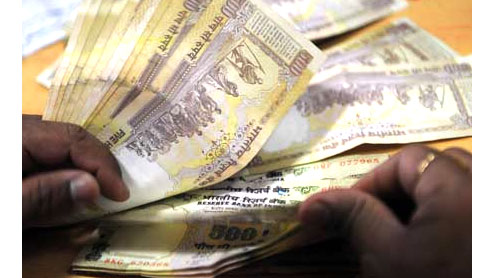 DUBAI: Money exchange centres across the UAE witnessed brisk remittance business as the Indian rupee touched a record low for the second day in a row on Tuesday pressured by escalating import bill, slowing domestic growth and concerns about outflows from the stock market.

The partially convertible rupee ended at 53.22/23 to the dollar, down 0.7 per cent from Monday’s close of 52.84/85, after touching a record low of 53.52 during the day. Some analysts believe the rupee soon would weaken to 55 to the dollar within days.Since the UAE currency is pegged to the dollar, non-resident Indians (NRIs) continued to benefit from the escalating exchange rate of the dirham against the rupee, which touched an all-time peak of Rs14.52 per dirham on Tuesday or Dh68.7 for Rs1,000, and closed lower at Rs14.48 or Dh69.1 for Rs1,000.

Money exchange centres reported brisk remittance business with NRIs, who have been waiting for the rupee to fall further after the currency gained following its historic low on November 22, rushing to benefit from the windfall.Bill O’ Neill, chief investment officer at Merrill Lynch Wealth Management, said the Indian rupee would regain its clout by June 2012 by bouncing back to Rs46 against the greenback and by December its would reach 45 against the dollar.

However, Sudhir Kumar Shetty, chief operating officer of UAE Exchange Centre, said the rupee would never be the same against dollar as it has moved to a different level of above 50 against the greenback.“Despite the intrinsic weakness of the dollar and the strong fundamentals of India’s economy, the rupee is sliding relentlessly against the US currency due to a combination of factors, including the eurozone contagion, a widening trade deficit due to escalating oil bill, spiralling inflation, the plummeting confidence level of global investors due to wrong signals they receive from India,” Shetty said.

The drop in industrial output has sent an adverse signal about India’s growth outlook. Adding to the concern of investors is the current account and fiscal deficit, Shetty said.An analyst at Barclays said for investors who have a longer-term horizon, the current level for the rupee might actually be a buying opportunity. “Once the risk sentiment stabilises, the rupee-dollar could move lower.

We do expect it to move back to 48 in 12 months time.”Currency experts in Dubai said demand for dollars from oil importers would continue to be a drag on the currency. India imports more than three-quarters of its oil requirements and local refiners are the biggest buyers of dollars in the domestic currency market.

The historic low for the rupee comes at a particularly bad time as India’s current account deficit is ballooning. Inflation also remains stubbornly high at nine per cent and a weak rupee will almost certainly raise energy costs, given that India imports three-quarters of its oil.The Reserve Bank of India (RBI) has been fighting rising prices by raising rates seven times this year to 8.5 per cent.

Another spike in inflation is the last thing it needs as the economy begins to show signs of slowing.A growing trade deficit and the low probability of strong intervention from the RBI, given the limited firepower in its currency reserves, is likely to keep the rupee under pressure, analysts said.

The rupee has lost 4.8 per cent of its value against the dollar in the last four weeks and 16 per cent so far this year.Investors took fright on Monday when government data showed India’s industrial production fell 5.1 per cent in October, the first monthly fall in more than two years and far more than expected.“Any intervention from the RBI is likely to be token,” said a foreign exchange dealer with a private-sector bank.

“The one factor that could help the rupee to some extent is growth-supporting steps from the RBI, like a cut in the cash reserve ratio.”The central bank is widely expected to keep rates on hold at its review on Friday, but economists expect it to accelerate monetary easing in 2012 as economic conditions worsen in Asia’s third-largest economy. – Khaleejnews