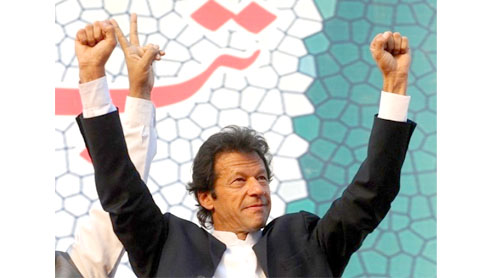 LAHORE: Imran Khan on Tuesday appointed bureaucrat-turned-politician as central information secretary of the Pakistan Tehrik-i-Insaaf, replacing Omar Sarfraz Cheema who held the post for three years and stood by the party even at the time when nobody thought the PTI stood any future.

This is the second most important appointment made by Mr Khan in less than two weeks – the first being that of Shah Mehmood Qureshi as senior vice-chairman.Mr Qureshi had severed his two-decade association with the PPP and joined the PTI at a public meeting in Ghotki on November 27. He was made vice-chairman on December 4. Mr Shafqat Mehmood joined the PTI on November 23 and was elevated to the position of the central information secretary on December 13.It is not clear whether the PTI constitution allows the chairman to allot so senior positions to people who joined the party only a few weeks ago. “We have serious reservations about the decisions. We have not been taken on board”, said a dejected party office-bearer.

Both these nominations have made other senior office-bearers vulnerable and they fear that more high-profile entries may deprive them of their existing positions.So much resentment was expressed on Tuesday by the PTI leaders and workers about Mr Khan’s unilateral decisions that some of them commented that the tsunami the former cricket hero often talked about had started hitting the party before turning the tables on rivals.They said some more politicians were about to join the PTI – and they would be given the remaining important positions in the party. If this happens, old leaders and workers might think of leaving the party, said a source.

According to one leader, another former foreign minister was in contact with the PTI leadership and would join the party once his conditions were met. Similarly, a female MNA who quit the lower house of parliament in the recent past was willing to join the PTI provided she was given the office of the secretary general or the information secretary. But now that the information secretary’s office had been given to Mr Shafqat Mehmood, the young lady would be thinking about the other options.Some PTI leaders say that even the provincial office-bearers could be changed to accommodate the new converts.

Highly reliable sources say that Mr Shafqat Mehmood has been unofficial adviser of the Punjab Chief Minister until a few weeks ago. He used to visit the provincial chief executive quite frequently at his Club Road office. He was also in contact with Mian Nawaz Sharif.A PTI office-bearer said on the condition of anonymity that there was serious resentment in the party over the unilateral decisions being taken by the chairman. “We’ll take up the matter with him”.An observer said that if Mr Khan was to bring about a revolution with the support of Bhuttoists, Musharrafites and Sharifites, then he should better quit politics and adopt some other profession.

He said if the political opportunists were not sincere to the parties they worked with for quite some time, how they would remain loyal to Mr Khan. One party leader argued that those who were joining the PTI at this juncture knew well that they were unable to win their seats independently.He said after allowing everyone to join the PTI, Mr Khan had blurred the difference between his party and others he planned to trounce through elections. – Nation