Envoys suggest renegotiation of deals with US 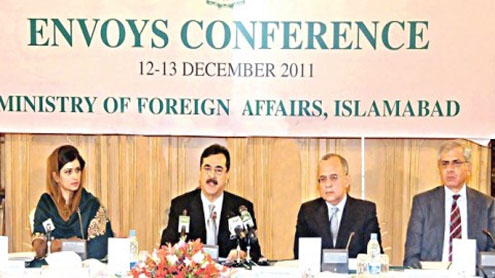 ISLAMABAD: The two-day ‘Envoys’ Conference’ concluded here on Tuesday with a strong recommendation to the government to renegotiate two vital agreements with the United States and NATO, one for supplies to the US-led foreign troops in Afghanistan and the other for ‘logistic support’ extended to Washington back in 2002.

Both of these vital agreements were made by the government of former president Pervez Musharraf with the Bush administration in 2002, a few months after the United States ousted the Taliban government for sheltering al Qaeda chief Osama bin Laden, who was blamed by the US for the 9/11 terrorist attacks. The agreement with International Security Assistance Force (ISAF) agreed upon in June 2002 was about NATO supplies for troops in Afghanistan, which was suspended by Islamabad last month in the wake of the Mohmand Agency air strike by NATO in which 24 Pakistani soldiers were killed.“The second agreement reached back in February 2002 was about extending logistic support to the US, including the use of Pakistani air bases and airspace, etc,” said a senior Pakistani official who wished to remain unnamed. He said the conference recommended that future security cooperation with any nation, including the US, should be approved by parliament.

CIA IMPRINT: The conference, which was attended by 15 Pakistani envoys from important world capitals including Washington also recommended the government seek a clear ‘CIA imprint’ in Pakistan from the United States and also that there must not be any drone strikes on Pakistani soil unless and until it is asked for by Islamabad and intelligence on the intended targets is given. The conference asked the government to seek a firm assurance from the US about no more unilateral strikes in Pakistan or border attacks on the pattern of the Mohmand air strike. The envoys also recommended the government pursue with vigour the ongoing reconciliation process in Afghanistan with the Taliban regardless of whether other countries did that or not.

RESUMPTION OF NATO SUPPLIES: The draft of recommendations prepared by the envoys’ committee, headed by Pakistan’s Ambassador-designate to the US Sherry Rehman, sought linking of the restoration of NATO supplies to satisfactory results of the US enquiry into the Mohmand Agency attack.“The conference recommended that in case of restoration of supplies, the NATO trucks and containers should be taxed, which could bring millions of dollars to the national exchequer,” the official said.NO EXTENSION BEYOND 2012: He said another important issue that was made part of recommendations was repatriation of Afghan refugees. “It was recommended that there should not be any extension in the deadline set for the return of Afghan refugees to Afghanistan beyond 2012, as some indications suggested that the UNHCR was about to seek that extension,” the official said.

He said further that it was observed during the conference that almost 90 percent of terrorist strikes in Pakistan were traced back to Afghan refugees, so the Pakistani government would work for their honorable return to Afghanistan.The recommendations have been forwarded to the Prime Minister’s Office, which will hand them over to parliament. A statement issued here by the Foreign Office at the end of the conference said Foreign Minister Hina Rabbani Khar welcomed the prime minister and apprised him of the deliberations at the conference on the evaluation of the regional situation and implications for Pakistan, identification of core foreign policy objectives and review of the terms of cooperation between Pakistan and US/NATO/ISAF.

NO TRANSGRESSION: Prime Minister Gilani also spoke to the conference on Tuesday, saying Pakistan’s cooperation with the US and NATO was based on respect for Pakistan’s sovereignty and territorial integrity and under no circumstances could it accept flagrant transgression of its frontiers.“This remains our base line and there can be no compromise on sovereignty, dignity and national honour,” said the prime minister.

He said Pakistan expected the US/NATO enquiry into the Mohmand Agency attack to come out clearly with the facts and provide answers to the “disturbing questions that our own investigations have raised”.“Pakistan’s foreign policy is based on immutable principles. The Charter of the United Nations, norms of inter-state conduct and international law provide the framework for our endeavors to ensure peace and security – both in our own region and the world,” said Gilani.

“We believe that stability and peace at home and in our region is critical for enabling our people to realise their aspirations for progress and social and economic development. With this in view, we have taken several initiatives,” he said.He said further that Pakistan had always lived by the high principles of civility and humanity. “Our hosting of millions of Afghan refugees for over three decades and our enormous sacrifices in the war against terror amply illustrate our commitment to the noble values that are intrinsic to our belief and national ethos,” he said.“It is imperative that all efforts should be directed to promoting durable stability and peace in Afghanistan. All principal stakeholders must be on the same page. We have continued to seek clarity and advocated the need for coherence, coordination and cooperation,” he added.

However, said Gilani, the aerial attacks on the border posts in Mohmand on November 26 constituted a huge set-back to the prospects of much-needed cooperation between all important stakeholders.
He said given the seriousness of the issue, the government had already taken several important decisions. “The NATO/ISAF logistic supply lines have been closed. Shamsi air base has been vacated. Pakistan did not participate in the Bonn Conference.

A broad-ranging review of our cooperation with US/NATO/ISAF was ordered,” he said.“The National Security Committee of the parliament has been mandated to undertake a detailed study of the 26/11 attacks and to make recommendations on the terms of our cooperation with US/NATO/ISAF. These will be considered by the joint sitting of parliament,” Gilani added. – PT