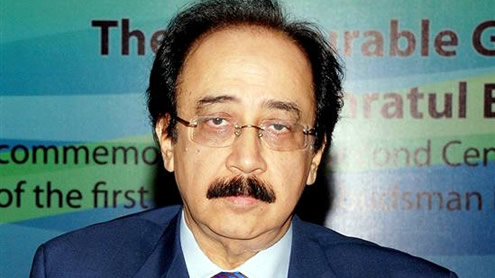 KARACHI: Sindh Ombudsman Asad Ashraf Malik on Monday said that this secretariat would work more effectively and give better results if it is given powers to issue stay order in any case, to initiate contempt of court proceedings and also given financial autonomy.

The rate of implementation on Ombudsman’s decisions is 70 percent, which could be improved if this office is further strengthened. Presently, the Ombudsman office can only request Sindh chief secretary to help in implementation of its decisions if faces some problem, he said. The Ombudsman was speaking at a meeting with members of Karachi Chamber of Commerce and Industry, here at KCCI Secretariat on Monday.   Highlighting the role of his office, he said that there had been significant decrease in corruption, misuse of powers and other mal-practices in government departments. He sought cooperation from all sections of the society so that speedy and inexpensive justice could be provided to the common man.

On the occasion, he announced to form a coordination committee at the Ombudsman Secretariat with due representation of the business community to effectively deal with taxes and other revenue matters. Malik said that 11 zonal offices of the Ombudsman were working in different areas of the province. People can file complaints with any Ombudsman office in person and they do not need to hire an advocate. The complaints are treated on merit and the decision is given within shortest possible time. He informed the meeting that children complaint cell has been set up at Sindh Ombudsman’s Secretariat to address the complaints of violence against children in schools and other places.

The Ombudsman office received more complaints of violence against children and women in rural areas than the urban areas, and the decision on these complaints had been taken within the shortest possible time. One could appeal only to the governor’s office against a decision of the Ombudsman, he said. President KCCI Mian Abrar Ahmed, Senior Vice President Younas Bashir, and former presidents KCCI Haroon Farooqui and Majyed Aziz apprised the provincial Ombudsman of the problems facing the business community at the hands of various public sector organisations. The meeting emphasised on close liaison between the trade bodies and the Ombudsman for enhancing its role. – Dailytimes