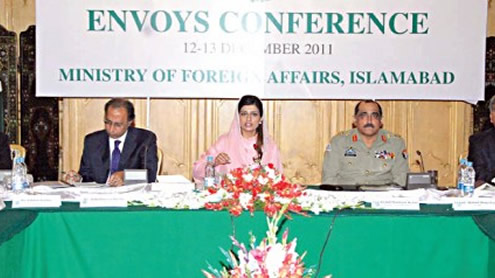 ISLAMABAD – Pakistani envoys posted in key world capitals and top political and military leaders of the country gathered on Monday for a meeting that will provide inputs for a proposed foreign policy revamp.

The top agenda item at the two-day Envoy’s Conference is shaping of Pakistan’s terms of engagement with the US and Isaf in war on terror in the backdrop of NATO attack on Pakistani checkpost that killed 24 soldiers. The official sources said that they have gathered to discuss different aspects of country’s foreign policy to make recommendations for an overhaul of Islamabad’s ties with key countries like the US and India. But the mode and manner of Monday’s proceeding of the conference made it clear that the gathering was in fact to lend an air of civilian authority to the decisions already taken by the military establishment. The envoys, who were briefed by the country’s top military leadership, will present their suggestions today which will then be incorporated in the new foreign policy to be presented in the Parliament for its approval. Yesterday’s meeting was chaired by Foreign Minister Hina Rabbani Khar and attended by ISI chief Lt-Gen Ahmed Shuja Pasha, Chairman Joint Chiefs of Staff Committee (CJCSC) Gen Khalid Shameem Wynne, Finance Minister Abdul Hafeez Sheikh, Foreign Secretary Salman Bashir, spokespersons Abdul Basit and Tehmina Janjua, ambassador-designate to the US Sherry Rehman and Pakistan’s envoys in 15 countries including India, China, Germany and Saudi Arabia.

Sources said that three sessions were held on Monday. In the first session, the ISI chief and the CJCSC briefed the meeting on the Nato attack, the current status of military ties with the US and the situation in neighbouring Afghanistan. In the second session, the envoys gave detailed presentations about the perceptions about the current situation in the countries where they are deputed as well as the reactions at the steps Pakistan has taken in the aftermath of the Nato attacks. Addressing the meeting Foreign Minister Hina Rabbani Khar said that Pakistan will retaliate strongly if Nato tried to breach Pakistan’s territorial sovereignty in future. She said that there was need to revisit Pakistan’s role in the war against terror and its relations with the US and other countries. She regretted that Pakistan was not being considered trustworthy despite its sacrificing the most in this war. The military officers also gave the gathering the army’s perspective on Pakistan’s current stand on the war on terrorism and the impact of the decision to close all Nato supply routes and to ask the US to vacate the Shamsi airbase, which was earlier being used by CIA-operated drones. They said that any attack on Pakistan’s sovereignty will be taken as attack on the country. Any planes or drones violating country’s airspace in future will be shot down and any trespassing on ground will be responded with full military might, they added.

ISI DG Gen Pasha said in his briefing that Nato attack was tantamount to disgrace Pakistan’s sacrifices in war against terrorism. The ISI DG said that the attack at Salalah checkpost was pre-planned and a “naked and unprovoked aggression”. He said that the checkpost was set up to check the militant infiltration, but there were no anti-aircraft guns or missiles as they did not perceive a threat for the allied forces. Gen Pasha said that Pakistan had taken adequate steps to offer befitting response to any such attack in future. He said any attack in future on Pakistan’s sovereignty will be considered as an act of war and responded as such. The military has evolved a foolproof security system in Fata and Pak-Afghan border to give a strong response in case of nay future aggression, he said. Gen Pahsa said that US was trying to use Pakistan as scapegoat for its failures in Afghanistan. “US is frustrated”, he added. About the Shamsi airbase, he said it had been completely vacated by the US security personnel, and Pakistani forces have taken its control. The envoys reportedly proposed imposition of heavy taxes on Nato trucks in the long-term and proposed not to resume Nato supplies anytime sooner. Pakistani Ambassador to UK did not attend the event citing “health issues” and sent his representative in the conference.

Prime Minister Yousuf Raza Gilani and Senator Raza Rabbani, who heads of the Parliamentary Committee on National Security, are expected to attend today’s session of the meeting. The envoys will then finalise recommendations for the proposed foreign policy refurbish. PM Gilani recently asked the said parliamentary committee to also give its recommendations for new terms of engagement on key foreign policy issues, including ties with the US and the Kashmir dispute. These recommendations will be debated during a joint session of both houses of the parliament, Gilani has said. The Foreign Office convened the meeting after PM Gilani’s call for a sweeping overhaul of Pakistan’s policy for the war on terrorism and ties with the US and other countries in the changed scenario after the cross-border Nato attack. – Nation