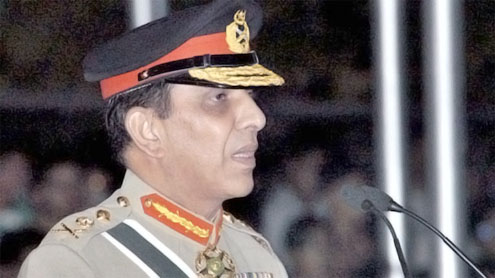 Reliable sources said General Kayani suspended the command and chain system in order to enable the senior officers on the posts to take appropriate action if Pakistani forces come under attack.The Chief of the Army Staff issued these orders on Wednesday night. According to which, the Pakistani military officer in the area will be responsible for retaliation against any aggressors in that particular area and he will be provided all kind of assistance that he will ask for.

The sources further said the decision would, however, be applicable to eventualities involving NATO troops. The sources added that General Kayani also ordered the troops to counter any aggression with full force and defend the motherland against any assailant and for that they do not need to wait for any orders from the high command.He also said that the Pakistan Air Force should have taken action when NATO helicopters violated the Pakistani airspace and attacked the Pakistani checkposts in Mohmand Agency last Saturday, the sources maintained. He further said the Air Force could not be called in as the communication system at the checkpost was destroyed in the Nato attack, the sources said.

Kayani ordered officers to utilise all resources at their disposal to give a befitting reply to the aggressors and they should not be spared.The Army Chief also praised the jawans of the Azad Kashmir Regiment deployed at the border checkposts.This was the first time after occupation of Afghanistan by allied forces that a Pakistani army chief, fed up of continuous border aggression, has issued such orders. – Nation