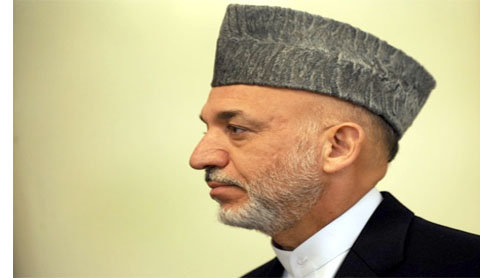 Karzai’s deputy spokesman Siamak Herawi told AFP that Pakistan was an important participant in the conference aimed at bridging peace after 10 years of war against the Taliban, and expressed hope that they would ultimately attend.“President Hamid Karzai called Prime Minister Gilani and officially asked the Pakistan government to participate in the Bonn conference,” said Herawi.“We regard Pakistan as an important country and are optimistic they will attend the Bonn conference”.

Gilani’s office issued a statement confirming that Karzai had asked the prime minister to reconsider.Gilani “said that Pakistan had been extending complete cooperation for peace and stability in Afghanistan” said the statement.“However, he further added that how could a country whose own sovereignty and territorial integrity was violated from Afghan soil play such a constructive role?”

Also, Afghanistan foreign ministry spokesman Janan Mosazai told AFP that ”we regard Pakistan as an important country in the region, we hope our Pakistani brothers will be there.”Merkel ‘very sorry’ about Pakistan boycott German Chancellor Angela Merkel said that she was “very sorry” about Pakistan’s announced boycott of the conference next week on the future of Afghanistan and would try to convince it to attend.Merkel said Germany would still “see what could be done to change” Islamabad’s decision to bow out of the meeting in the western German city, taken in protest at Nato air strikes which killed 24 Pakistani soldiers.

“We are both interested in constructive development of Afghanistan,” Merkel told reporters at a joint press conference with visiting King Abdullah II of Jordan.“Which is why I consider the conference hosted by the (German) foreign minister to be very important. We always said that conflicts can only be resolved in the region and Pakistan is part of this region which is why we are very sorry that this cancellation came today.”Merkel said that Berlin had not given up on convincing Islamabad to reverse its decision and attend the Bonn meeting, which will bring together foreign ministers from around 100 countries to discuss commitments to the war-ravaged country after the withdrawal of Nato troops in 2014.

“I understand Pakistan’s concern about the loss of human life due to Nato troops but this should not distract from the fact that this Afghanistan conference is a very, very important conference,” she said.“There was a loya jirga (grand assembly) in Afghanistan and there is now a very, very good chance for a possible political process. On the one hand I can understand (the boycott) but on the other, we will see what still can be done.”A Pakistani official told AFP that Islamabad would boycott Monday’s conference in Bonn over the deadly Nato air strikes at the weekend. – Thetribune