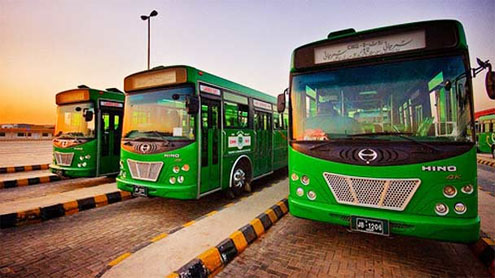 LAHORE: The Punjab government signed an agreement with the Chinese company, Anhui Ankai Automobile Company Limited, on Monday, for the provision of modern CNG air-conditioned buses.

Speaking on the occasion, Punjab Chief Minister (CM) Shahbaz Sharif said that the Punjab government was implementing a comprehensive strategy for the provision of an affordable and comfortable transport service to the people and the programme had already been initiated in the metropolis. He said that the agreement signed with the Chinese company Ankai was a welcome step and these buses would operate in Faisalabad, Rawalpindi, Gujranwala, Multan and other big cities of the province as well. He added that the best operators would be selected for this transport system.

Shahbaz said that a modern urban transport system was being set up in all the major cities of the province with help and cooperation from China, adding that the CNG air-conditioned buses were being operated in Lahore with the special help from the Foton Company and now an agreement had also been signed with Ankai company for acquiring 575 more buses.

Separately, while talking to different assembly members belonging to various districts who called on him on Monday, Shahbaz said that all-out resources are being utilised for the speedy completion of development projects across the province as well as for the convenience and prosperity of the masses. Dailytimes