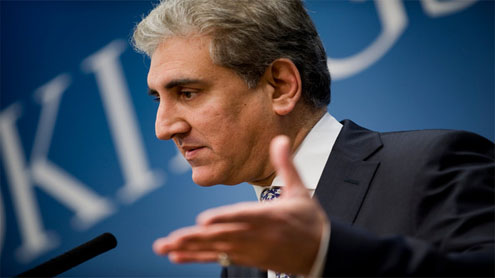 GHOTKI – Former foreign minister Shah Mehmood Qureshi joined the PTI on Sunday, disappointing the PML-N and sending the PPP into a shock by his opening the doors of rural Sindh to the revolutionary movement of Imran Khan which is already sweeping the urban areas of the country.
Qureshi made the announcement at a rally he jointly led with PTI chief Imran Khan in Ghotki, part of the broad hinterland in the Sindh and near the Southern Punjab, where the former minister is considered powerful.

“I announce I am joining a movement, which is struggling to win justice for people,” Qureshi said of Imran’s Pakistan Tehreek-i-Insaf (Movement for Justice).
By joining forces with cricketer-turned-politician, Qureshi has brought a great power boost to PTI and his entry will spearhead party’s campaign to win the next general election. Qureshi, who earned great public appeal by his walking out of the PPP on the Ramond Davis issue, has opened the way for the PTI to penetrate in Sindh and Southern Punjab.

“Winds of change have now begun,” Qureshi told the rally attended by several thousand supporters at Ghotki. “I am embarking on a new journey and from today onwards, Shah Mehmood is part of your team,” he told Imran Khan to thunderous applause.
Imran Khan addressing the public meeting condemned the NATO strike and demanded that Pakistan order all CIA agents to leave in protest. “We should raise the issue at the UN Security Council because it was an attack on our country and soldiers… We need not bow before any one. The time has come to build a new Pakistan by introducing a new system reflecting will of the people.”

Qureshi used the rally to criticise President Zardari. “They have indulged in loot and plunder,” he said. “The time has come to seek a fresh mandate from the people,” he added. He said the atomic programme of the country was unsafe in the rule of Zardari, adding that he would give the details on this in PTI’s Karachi gathering on Dec 25.

Qureshi said that Asif Zardari had challenged him to hold a public gathering in Sindh and told him that would not allowed him to enter the province. “Now Asif Zardari would be looking at Ghotki,” he said, resolving that he will tear down the Somnath (a Hindu temple which was raided by Mehmood Gaznavi of Afghanistan), in a reference to perceived impregnability of Sindh to other political parties due to strong hold of PPP there).
The former foreign minister alleged that the duo of Asif Zardari and Gilani is the ‘most corrupt’ and they are notorious around the world for their corruption. As long as they are rulers, the country and its people would not progress. He said that 80 million out of the 180 million people of the country are living under poverty line due to increased prices of utility items. Jobless youth are looking to new leadership, he said while pointing to Irman. Loadshedding and other such problems have made peoples lives miserable. Low selling price of agriculture output and high prices of fertilisers and other inputs has taken a great toll on financial heath of the farmers, he added.

Qureshi demanded the audience to give their vote on his political future and tell him whether he should simply go home or start his struggle to save the country with a renewed vigour. After a vocal go ahead from the cheering attendants, the former foreign minister roared in the loud speaker: “Now is time to remove the corrupt rulers, now is the time for change.” And he took a pledge from his supports that they will continue supporting him in his cause.
He said that he was shocked at the murder of three Pakistani by Raymond Davis on December 27 in Lahore, adding that he was pressed to pave way for the release of US murderer but he refused and tendered his resignation as foreign minister on Dec 30.

Qureshi said that he remained in PPP for 20 years but regrettably Asif Zardari buried the vision of Shaheed Benazir Bhutto and philosophy of Shaheed Zulfikar Ali Bhutto. Zardari maligned the reconciliation philosophy by misusing it to keep in power, he said, adding that four years have passed to the death of Benazir but her murderers have not been arrested. Those people whom Benazir Bhutto had mentioned as her possible future attackers were now sitting in the first line of Gilani and Zardari government.

Earlier, Imran Khan in his speech invited Qureshi to join PTI and said that this is the time to part ways with America and walk out of its war which has already engulfed over 40,000 Pakistanis. He said there is no win in sight in this war and no one even knows how a victory could be defined regarding this conflict. Pakistan, he asserted, was fighting this war only for dollars.

Pakistan does not need any foreign aid, he said, adding that PTI will end the corruption and will start new system for development of country by bringing in justice. He said no political party can stop this tsunami of struggle for justice. He said Chaudhry Nisar will see how he (Imran) gets two wickets on a single ball delivery in Karachi. Imran said that PTI will follow merit and will organise party elections down to the union council level.
PTI chairman Imran Khan arrived with a big procession at the gathering spot, where thousands of PTI and Qureshi supporters were already present.
Over 32,000 chairs were arranged at the venue which proved insufficient for the crowed and the tents marking the boundary were removed to create more space, but even then large number of people failed to find a place there and they kept on roads leading to the meeting venue.

Electric power was suspended by SESCO in Ghotki allegedly to fail the public meeting and many people complained that authorities tried to divert their caravans so they may not reach the venue of the meeting.Nation