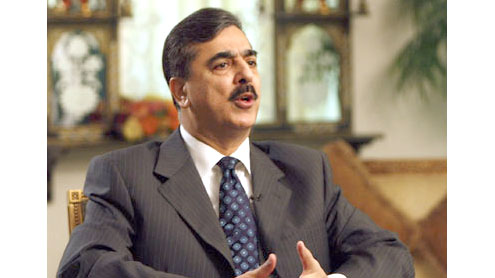 ISLAMABAD:  Prime Minister Syed Yusuf Raza Gilani asked the Ministry of Interior and the police organizations to develop and implement policies to combat violence against women.

He was addressing the 2nd International Women Police Conference on the topic of Gender Responsive Policing,attended by international and national police delegates and Minister for Interior, Senator Rehman Malik.The Prime Minister directed the concerned ministries to take steps to increase women representation by fully implementing recruitment quota, invest in capacity building of women police, diversify women’s role in policing and strengthen policing to adequately deal with crimes of violence against them.

He said these priorities have already been outlined in the recently formulated Gender Strategy of Police seeking ownership and implementation for gender responsive policing.“Let me assure you of my personal commitment and support of the government to all the initiatives aimed at enhancing women’s role and participation in policing,” Gilani said.He said women as equal citizens of the states have a significant role to play in national development.

“As women police officers, your passion and aspirations for better future and your contributions to the law enforcement are of great value to your nations,” he added.Gilani said he was proud to address a gathering of brave women, who chose a challenging career of maintaining law and order and protecting the lives and properties of the citizens.Gilani said the government  was committed to empower women and create conditions essential for social and gender justice.

“We believe in principles of equality as enshrined in the Constitution of the Islamic Republic of Pakistan,” he said.e said the government recognizes the value of women’s participation in public affairs and was therefore committed to gender equality reforms.Shaheed Mohtarma Benazir Bhutto’s contributions for women empowerment were a glorious chapter in the history of emancipation of the Pakistani women.He said it was during Mohtarma’s tenure that pro-women initiatives, such as establishment of First Women Bank, and project of lady health workers were launched to bring about change in the lives of women.

Gilani said the Social Action Programmes during her tenure were launched with a view to reduce gender disparities and improving women’s access to social services.Pakistan, under her dynamic leadership, also acceded to the Convention on the Elimination of All Forms of Discrimination against Women (CEDAW) on Feb. 29, 1996.He quoted the Shaheed leader as saying; “May be it’s stereotypical, but I think that women leaders are more nurturing and sensitive to the social needs of society. Invariably, women’s rights lead to further modernization of society as educational, housing and health needs are finally met.”

He said the government has taken a number of steps that reflect its commitment to mainstream women’s issues in the public policies.In this regard he mentioned that December 22 was now being celebrated as the “National Day of Women” to commemorate the achievements of women and acknowledge their role in the national progress.He said the women need to be empowered and mentioned that the Benazir Income Support Programme, the country’s largest social safety net, was aimed at helping them stand on their feet.Gilani said besides direct cash transfers to underprivileged women, BISP’s various initiatives impart technical training, health insurance and interest-free loans.

BISP also played a leading role in helping the women during the unprecedented floods. Poverty Survey launched by BISP is underway. Millions of families are benefiting from Benazir Income Support Programme.He also mentioned the enactment of the  “Protection against Sexual Harassment of Women at Workplace Act 2010”.“I am personally looking after its implementation as I regard women and minorities as my core constituencies,” Gilani said.

He said the passage of “The Prevention of Anti-Women Practices Bill 2008” by the National Assembly was a landmark event in the women struggle for empowerment and emancipation.Gilani said the enactment of bill would put an end to inhuman and un-Islamic customs against the women besides further empowering them to take charge of their lives.

Such evil customs as Wani, Swara, Badla-e-Sulh, and marriage with the Holy Quran were not only contrary to civilized norms and moral values but also against the teachings of Islam. The unanimous approval of the bill is a demonstration of collective wisdom of Parliament.He said Shaheed Benazir Bhutto Centers for Women have been increased so that immediate relief may be provided to the female victims of violence.Gilani said the government has also established the office of Ombudsperson to address the complaints of women. Ms Mussarat Hilali, a woman rights activist, was appointed as Ombudsperson.

Besides, he mentioned, the government also increased the women quota from 5% to 10% for recruitment in the civil services of Pakistan to encourage them to join public sector. This quota is being implemented very strictly across the country.He said the government has de-listed the First Women Bank from the privatization list enabling it to continue to play its due role in the economic empowerment of women.He said women were serving at key positions in the government.  The Speaker of the National Assembly and Pakistan’s Foreign Minister are both women. This government also appointed nine women academicians to head the universities and scores of women ambassadors to represent Pakistan.

The government also approved the induction of Lady Naval officers and lady pilots in the Air Force. The current Parliament has a good number of women parliamentarians who have been playing their due role in pushing for pro-women legislation.He said the government has also declared the conferment of Fatima Jinnah awards on outstanding women of Pakistan in recognition of their meritorious services.

Prime Minister Gilani said the government believes in the ideals defined by the Founder of Nation, Mohammad Ali Jinnah, who advocated for women’s equal role and contribution in nation building and progress.He quoted Quaid-e-Azam Mohammad Ali Jinnah as saying; “I have always maintained that no nation can ever be worthy of its existence that cannot take its women along with the men.”

He was also appreciative of the Ministry of Interior, National Police Bureau, and the German Agency for International Cooperation for organizing the conference.He hoped that deliberations of the Conference would address challenges being faced by women in police and learn about their aspirations for professional development and better positioning. – APP