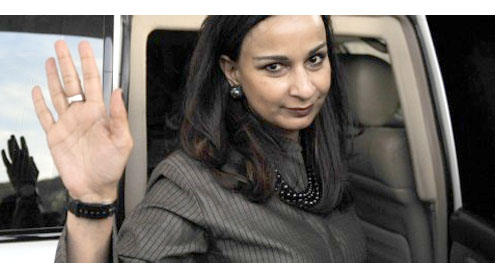 Hushing up speculation as to who would succeed Husain Haqqani as Pakistan’s ambassador to the United States, Prime Minister Yousaf Raza Gilani appointed on Wednesday another Pakistan People’s Party (PPP) loyalist and former information minister Sherry Rehman as Pakistan’s new envoy to Washington, suggesting that the appointment was still a prerogative of the political government even after the explosive situation it faced following the emergence of the secret memo that appeared to threaten civil-military relations.

Haqqani was removed on Tuesday when he was confronted by Chief of Army Staff General Ashfaq Parvez Kayani and Inter-Services Intelligence (ISI) chief Lt General Ahmad Shuja Pasha, in the presence of President Asif Ali Zardari and Prime Minister Gilani, for his “involvement” in the memo controversy.Sherry Rehman, who, after she had resigned as information minister, wasconsidered close to the prime minister since she was said to have lost the confidence of President Zardari for taking a position different from his on media-related issues, emerged as a dark horse and her appointment clearly suggested that she was approved by all for the important responsibility at a time when Islamabad’s relations with Washington have plummeted.

Nevertheless, she will have to face a daunting task of being the Pakistani envoy in the world’s most important capital and improving Pakistan-US relations, which suffered a serious blow after differences erupted between the two countries following al Qaeda chief Osama bin Laden’s killing in a covert US raid in Abbottabad on May 2.Talking to reporters on Wednesday after her appointment as the new ambassador, Sherry said: “We all have to forge a progressive, dynamic Pakistan out of the ashes that are often left to us by the fire of terrorism and by the fire of extremism.”

Earlier, a press statement from the prime minister’s office said: “Prime Minister Yousaf Raza Gilani has appointed Ms Sherry Rehman as Pakistan’s Ambassador to United States of America.” Sherry also called on the prime minister and discussed matters relating to her diplomatic assignment.She is a member of the National Assembly and currently serving as chairwoman of the Pakistan Red Crescent Society. Sherry Rehman, 50, is a senior PPP leader and has been a vocal supporter of civilian supremacy in the country. She resigned as information minister in March 2009 owing to her opposition to the Presidency’s move to order cable operators to block a private TV channel because of its criticism of government policies.

The new Pakistani ambassador is the founding president of the Jinnah Institute in Islamabad, an independent public policy institute committed to regional peace and inclusive democracy in Pakistan.She also co-chairs several track-two strategic dialogues with India, and is convener of a similar institutionalised dialogue process to be held between Pakistan and Afghanistan later this year. She lectures widely on strategic security challenges facing Pakistan, and is a key member of the legislative councils that govern both Azad Kashmir and Gilgit-Baltistan.

Sherry Rehman is also the former editor of leading English magazine Herald and her background as a journalist for some 20 years has given her wide media outreach as an incumbent second-term lawmaker with a frontline public position against religious extremism.The appointment of Sherry Rehman left some observers in surprise as they were expecting the army, which supposedly pressured the government to oust Haqqani from the ambassador’s office in Washington, to push for the appointment of a retired senior army officer as the new envoy.

Pakistan’s new envoy to the US was also close to slain PPP chairwoman and former prime minister Benazir Bhutto and was in the same motorcade with her when Bhutto was assassinated in a suicide attack in December 2007. She was, however, not injured in the bombing.She came under heavy criticism from hardline religious elements in the country when she started speaking against rising militancy and also the flaws that she saw in the blasphemy law. She had to go abroad for a while in the wake of the assassination of former Punjab governor Salmaan Taseer and even after her return she had to live under heavy protection.

Haqqani, who also met Sherry Rehman on Wednesday, expressed his best wishes for the new ambassador and later tweeted: “Ah! To wake up in my motherland, without the burden of conducting Pakistan’s most difficult external relationship.” He also called Sherry a “dedicated democrat”.In her press briefing, Sherry also hailed the services of Haqqani and said that he had served his country well. “[Haqqani] has gracefully tendered his resignation because he doesn’t want to tarnish the country’s image just because he became controversial. But this doesn’t mean he has admitted any involvement in the memo scandal.” – PT