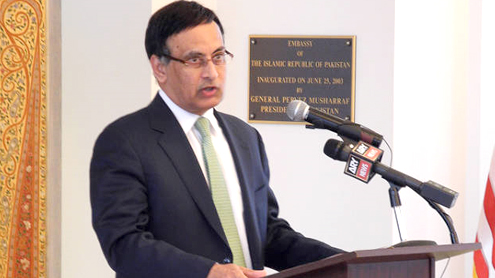 ISLAMABAD: The embattled ambassador Husain Haqqani, who is adamant at his innocence in the memogate affair, is set for a fire-walk as he faces the troika – the president, the prime minister, and the army chief – and probably the ISI chief.

MNA Farahnaz Ispahani, the wife of Pakistan’s ambassador to US Hussain Haqqani, demanded a forensic investigation of blackberry and computer of the ambassador. Talking to media persons on Monday, Farahnaz Ispahani, who is also media adviser at Aiwan-e-Sadr, said that a case will be filed and thorough investigation of the matter will be carried out. She confidently said her husband would come clean in the investigation. She said Mansoor Ijaz was working against democracy in Pakistan and denied any top-level government involvement in the memo controversy.Having ‘convinced’ the president of his being no-guilty and expressing his willingness to hand over his BlackBerry for investigation, Haqqani will now face tough questions about his alleged role in the memo in today’s meeting, according to an official source familiar with the development.

The presence of Inter-Services Intelligence chief Maj Gen Shuja Pasha is also expected in the meeting of the diplomat with the Prime Minister Yousuf Raza Gilani, Army Chief Gen Ashfaq Parvez Kayani and President Asif Ali Zardari.A US businessman of Pakistani origin, Mansoor Ijaj, had accused the diplomat of ordering him to draft the memo for delivery via a middleman to former chairman US joint chiefs of staff Admiral Mike Mullen, asking for assistance to Pakistan’s civilian government to rein in the military establishment.

The convening of the troika meeting, second in less than a week on the memo issue, was decided after a meeting between President Zardari and Haqqani on Sunday. Haqqani, who arrived in the capital earlier in the day, had at least two sessions with the president where he reportedly pleaded ‘not guilty’. A source close to the ambassador said the ambassador strongly denied his role in drafting the memo and offered to face any inquiry. He told the president he is ready to answer questions raised by the military.There was no official word about the reported meetings. Presidential spokesman Farhatullah Babar said ‘no official meeting’ was slotted as yesterday was a Sunday.

During his informal meetings with Zardrai, Haqqani reportedly presented his version of events linked to the memo that has shaken up Pakistan’s political and diplomatic circles. Haqqani’s ‘primary defence’ was that the memo was ‘unsigned and unverified’.Before the meetings, it was expected that Haqqani might resign as he had already said that he could quit if ordered to do so by Zardari. But the sources said that Haqqani was asked not to tender his resignation and to face the situation with the assertion that he was not involved in the matter.“I think the problem has been resolved and details will be made public in a couple of days,” a source was quoted as saying. The envoy, who arrived in Islamabad last morning, after being called back by the government, reportedly also held informal meetings with some officials of the armed forces and Foreign Office on Sunday.

Haqqani has reportedly said he is prepared to face an inquiry to prove that Ijaz’s claims are false. Haqqani believes Ijaz is blaming him to ‘create a crisis’ in Pakistan. He said all the technical proof was fabricated and he was ready for a probe led by a Supreme Court judge.“I heard that certain elements in the military are accusing me of working against Pakistan’s interests. I challenge them to say this on my face,” the source quoted Haqqani as telling the president.Prior to the memo issue, the Pakistan Army and the Inter-Services Intelligence (ISI) were upset with Haqqani over issuance of visas to Americans without ‘prior-scrutiny’ by the Pakistani security agencies. Before leaving Washington for Pakistan, Haqqani met US special representative to Pakistan and Afghanistan Marc Grossman.

Haqqani told a private TV channel on Monday that he was unable to understand the claims made by American businessman Mansoor Ijaz. He said that Ijaz calls him as a patriot and a liar at the same time. The ambassador raised many questions and asked that why Mansoor Ijaz sent the memo, who delivered that to Admiral Mike Mullen and how it was proved that he (Haqqani) was the author of that document.Haqqani also said that Mansoor Ijaz has now accepted that President Zardari was unaware of the memo but he had said otherwise when he initiated the entire fiasco. The ambassador predicted that Ijaz will step back from other claims as well and suggested that agencies should investigate that who is behind the memogate scandal and who can take advantage of the army-establishment clash.