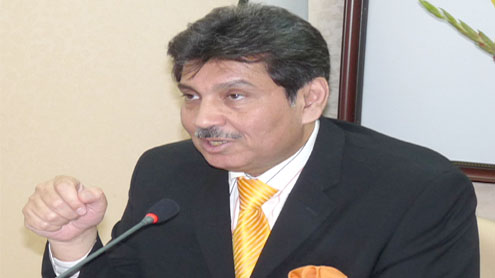 The prime minister said he was being pressed by his party leadership and members to act against Mr Hayat who petitioned a case in Supreme Court against his own government for corruption and mismanagement in the setting up of Rental Power Projects (RPPs.)The PM said the housing minister was free to carry on with the case but not before resigning from his current portfolio.Chaudhry Shujaat Hussain on the other hand, assured prime minister that he would meet and try to convince the housing minister one more time.

APP adds: Various parliamentarians also called on Prime Minister Gilani at his Parliament House Chamber and felicitated him on delivering a convincing speech on the floor of National Assembly.They said the PM responded to the allegations of the Opposition Leader. Speaking on the occasion, Gilani said he had launched ‘Karwan-i-Tameer’ from Phalia and Gojra and would tour across the country to inaugurate the public betterment projects to be completed in the tenure of democratic govt. The PM said that the political opponents were taking out rallies to harm democratic process.