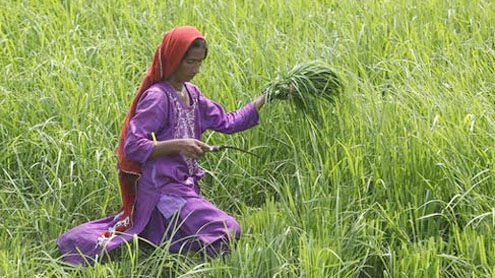 Punjab Minister for Agriculture Ahmad Ali Aulakh has directed the officers of the provincial agriculture department to make all out efforts for earliest completion of sowing of wheat on 16.89 million acres of land in the province so as to meet the production target of 19.20 million tons.

‘There are apprehensions of reduction in wheat production this year because of wrong policies of the federal government regarding fertilisers,’ Aulakh remarked while chairing a meeting of the agriculture extension wing officers on Wednesday.The meeting was held at the Ayub Agriculture Research Institute (AARI) to review the ongoing wheat sowing in the province, a spokesman of the department said.He disclosed that the department has acquired services of 1,500 agricultural graduates to guide the wheat growers to ensure meeting the production targets avoiding any economic and food security threat.

He said these graduates will be given a stipend of Rs 6000 per graduate.The government has approved Rs 120 million in this regard out of which a sum of Rs 12 million will be disbursed among the agricultural graduates.The minister stated that the department could play a very important role in resolving the problems faced by the farmers and a heavy responsibility is on the shoulders of government officers in this regard.

He asked them to work with dedication and guide growers about latest techniques and technologies to increase per acre yield.Aulakh stated that the provincial government allocated a package of Rs 2 billion for improving the agriculture and livestock products and their supply chain.He called upon the scientists to keep quality also in mind while preparing new varieties of different agricultural products for increasing yield.Director General Research AARI Dr Noor ul Islam in his address averred that the scientists should work to ensure continuation of present trend of increase in wheat production and utilise all their abilities in this regard. – Brecorder