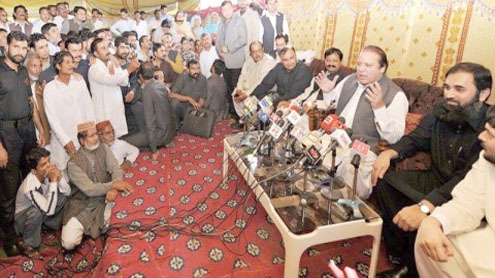 LAHORE: Pakistan Muslim League-Nawaz (PML-N) President Nawaz Sharif has said that his party not only supported the creation of Bahawalpur province, but also wanted the status of Bahawalpur as state to be restored.

He expressed these views during a meeting with former deputy speaker of the National Assembly Jafar Iqbal, MNA Ishrat Ashraf and MPA Zaib Jafar at PML-N Secretariat, Lahore.The PML-N president said has sought “Charter of Pakistan” for the next 10-15 years to provide basis for a strong economy and energy, education, governance and infrastructure sectors.Bashing the PPP government for destabilising the country by increasing the plight of the people, he said his government’s policies in 1990-91 were exemplary for reviving the economy.

“Pakistan was progressing faster than India and we had initiated the motorway and modern telecommunication projects, but the powers of status quo quashed our efforts of making Pakistan a developed country by overthrowing our government,” Nawaz said. “Our policies earned respect for Pakistan and forced India to accept the reality of Pakistan and then Indian prime minister came to Lahore with a message of peace,” Nawaz said.“But Musharraf damaged all my efforts,” he added.The PML-N chief praised the Punjab government for having zero-tolerance policy against corruption, which was obvious from the fact that there was no corruption scandal in Punjab during the PML-N government. – PT