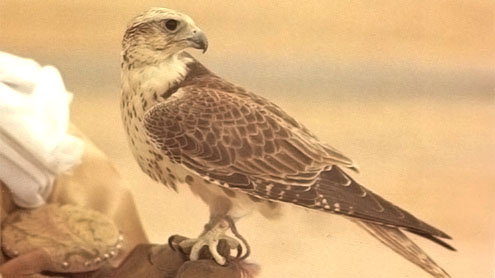 Custom officials in the Pakistani city of Karachi have confiscated 74 falcons that they say were being unlawfully transported into the country.

Officials say the falcons were brought from Qatar by a member of its royal family without proper documentation.Members of Gulf royal families routinely bring in such falcons for hunting birds and other animals in Pakistan, with government sanction.Wildlife officials say that some of the birds they hunt are endangered.Among them is the Houbara bustard – believed to be widely prized throughout the Middle East as a quarry for falconers because its meat is valued an aphrodisiac.

Arab and local government officials, however, deny hunting any endangered species.”The documentation provided by the embassy had permission for only 40 falcons,” Qamaruddin Thalo, spokesman for the customs department told the BBC.But the falcons actually numbered 114, 74 more than allowed, he said.”We now have all the birds in custody and have asked the embassy to furnish an explanation in three days,” the official said, adding that if an explanation was not given, a case would be “registered according to the law”.

The falcons were being brought in at the start of the winter season, a time when bird migrations into southern Pakistan are at a peak.Although locals are prohibited from hunting the birds, Arab sheikhs from the Gulf royal families are given special blanket licences to do so.”Its something that’s illegal and unprecedented elsewhere in the world,” Dr Rab Nawaz, local representative of the World Wildlife Federation (WWF) told the BBC.

“But the Arabs sheikhs are allowed due to our ‘special relationship’ with them.”Hundreds of thousands of Pakistanis are employed in various industries in the Gulf kingdoms, which also provide bailout loans and cheap oil to Pakistan’s perpetually beleaguered economy.For this reason the licences are seen as being in Pakistan’s national interest. – BBC