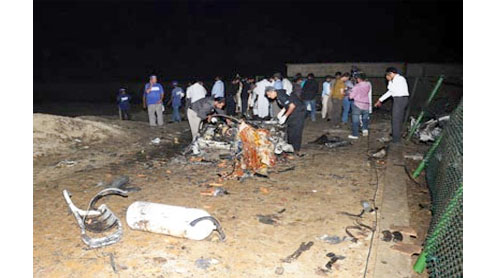 KARACHI: At least four people including a policeman have been killed in a blast at the Village restaurant on Seaview in Defence Phase 8 area of Karachi on Wednesday.

One of the two police officials who were injured in the attack succumbed to his injuries while the surviving officer has been shifted to a hospital.According to details, the three suicide attackers including a woman blew themselves up when police tried to stop a Suzuki Bolan for routine checking. The attackers were also armed with AK-47 rifles, which the police recovered from the vehicle.The police said that the van was probably on a suicide mission. Suicide jackets have also been found at the scene, the police said.

Police and Rangers have arrived at the scene and cordoned off the area.Even ambulances were not being allowed to enter the area. Apparently, the police had information of the vehicle and had been following the Suzuki van since 4pm.Sindh Home Minister Manzoor Wassan has also reached the scene. He announced Rs.2 million for the family of the deceased police officer, while Rs.500,000 was announced for the injured police official.Sindh Chief Minister Syed Qaim Ali Shah also arrived at the scene. – Brecorder