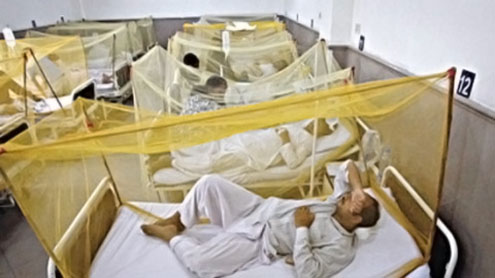 Lahore: The Punjab government showed criminal negligence in implementing the Dengue & Dengue Hemorrhagic Fever Control Programme 2009-2012 approved by the Punjab Health Department, which resulted in spreading the virus and killing more than 400 people and affecting thousands.

High-ups of the government, instead of accepting their negligence, are trying to fool the masses by telling lies and hiding this report to avoid public anger. The seriousness of the government could be judged by words of executing authority of the programme, Punjab Health Director General Chaudhry Aslam, who when asked to comment about the failure of the government to implement the project said, “Forget dengue, its nothing, I don’t remember any such programme.”

Punjab Chief Minister Shahbaz Sharif, speaking at Jinnah Hospital, admitted that his government was not prepared for the virus. However, he tried to find an excuse that the epidemic took the province by surprise and no one had knowledge of its severity before hand.

On the other hand, facts available with Pakistan Today tell that the government machinery, including the Punjab CM, was aware of the disease and its rise in the province in 2009. The PC-1 of the DF & DHF Control Programme clearly warned the government in 2009 that any delay in implementation of the programme about dengue would be disastrous for public health. It also said that the cost of the programme would increase if it was deferred. However, due to delay in implementation, the cost increased more than 10 times.

The actual cost of the programme was Rs 198.19 million but now more than Rs 2.5 billion had been spent for control of dengue and still it was continuing.The authorities concerned shied away from talking about the project and attempted to hide the facts saying that all measures planned in PC-1 of the DF & DHF Control Programme 2009-2012 had been completed.

But they could not justify why the measures could not be completed on the time described in the programme. Sources said that then health secretary Fawad Hassan Fawad should have taken action and implemented the programme but he remained silent and did not show any concern for its implementation.Present Health Secretary Jahanzeb Khan said that political and bureaucratic authorities misjudged the importance of the project in 2009 and focused resources more on other health issues, which they thought were of larger significance at that time.

He said that in 2009, there was no alarming level of the disease and a very low ratio of the disease had been recorded in 2008. Jahanzeb said that the disease was new for experts, therefore, there had been a few lapses in its management. Naming it “health lapses”, he said that despite the project not being implemented, the government had been able to manage the disease this year by focusing all of its energies and resources.

The DG health called it an outdated issue which he did not remember at all. “Forget what was said and thought in 2009”, Aslam said while talking to Pakistan Today. The programme was based on data of the disease recorded during 2006-2008 according to which 1,407 people in Punjab, including 1,332 in Lahore, were affected by dengue out of which nine died. The comprehensive programme had a strategy to manage the disease effectively.

The programme’s objectives, included stopping the transmission of dengue and dengue hemorrhagic fever through controlling the population of its carrier mosquitoes, reducing the morbidity and mortality rate of the disease, providing free treatment to patients, creating awareness among the masses regarding preventive and curative measures and building capacity of health professionals to manage the disease.

But none of the objectives could be met on time before the worst of the epidemic broke out in the province with a major focus on the provincial capital with around 50,000 patients of dengue and dengue hemorrhagic fever and hundreds of deaths in Lahore only. The occurrence of the disease in other parts of the province had also been of alarming levels with Faisalabad coming on second number followed by Rawalpindi and Multan. Cases were also reported in cities far away from Lahore, including Rajanpur, Rahim Yar Khan, Mianwali and Dera Ghazi Khan. – PT