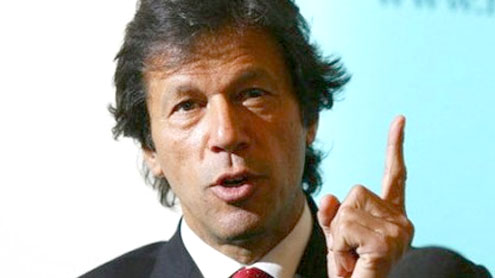 NEW DELHI: Pakistan Tehreek-e-Insaaf Chairman Imran Khan on Friday said he would insist on civilian supremacy over the Country’s powerful military if his party came into power, adding that he would rather resign if the army and the ISI did not function under him as prime minister.

Days after the PTI stunned its opponents by drawing a mammoth crowd during a rally in Lahore, the cricketer-turned-politician said if he became the prime minister, he would press for civilian supremacy over the army and the ISI so that he could implement his agenda. “Unless I can implement my agenda – which means I take responsibility for everything that’s happening in Pakistan – it will mean that the army was under me and it will mean that the ISI can do nothing unless it reported to me, it means that the army’s budget will be audited by a civilian setup, it means I will take responsibility for anything that will happen inside my country, it means I will take responsibility that no terrorism will take place from the Pakistani soil otherwise, I will resign,” he told Karan Thapar in an interview with CNN-IBN. Khan, 58, was responding to a question on whether he would challenge army chief Gen Ashfaq Kayani and the corps commanders.

Asked specifically if he would be Gen Kayani’s boss on becoming the premier, Khan said, “100 percent. I have never ever been controlled by anyone.” “When Zulfikar Ali Bhutto was prime minister, he sacked the army chief and the air chief… When the great Jinnah was in charge, you could never imagine the army asserting itself. We have non-leaders in Pakistan. These people are here to make money. They are not interested in governance,” he said in the interview.

He said the army was controlling the situation in Balochistan, the Tribal Areas and the erstwhile Taliban stronghold of Swat with “no civilian input” while the country’s largest city of Karachi was controlled by the paramilitary Pakistan Rangers. Asked about media reports that his party had the backing of the military and questioned about his lack of criticism of the military, Khan contended that he had never been controlled by anyone in his public life of 35 years.

“Have I got a price tag on me? Can anyone buy me?” he asked. “Why should I criticise [the army chief] when in a parliamentary democracy, the prime minister is the head of state? He has all the authority, he has all the responsibility,” he said. Khan claimed the premier was responsible for tackling any corruption in the army. “This is supposed to be a democratic setup, either they should say that they are not in charge (or) they should resign. If they cannot be responsible for what is going on in Pakistan, they should resign,” he said.