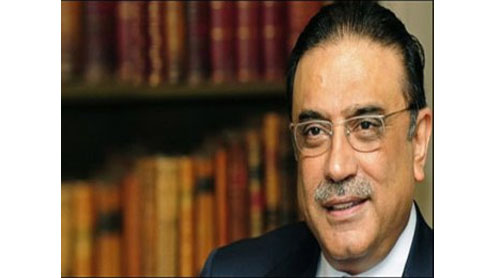 KARACHI: President Asif Ali Zardari on Thursday directed that infrastructure projects related to irrigation and roads, approved by the Sindh Government be finalized by the Planning Commission in one week and the work completed within one year.

The President said the government was prioritizing the rehabilitation and reconstruction of road networks as the government wanted to increase road density in the country.The President said rehabilitation of thousands of kilometers of national and provincial roads, huge damages to the Railway track and breaches and overflows in protective bunds of the canals was a huge challenge.

He said that Pakistan looked towards its friends for assistance in rehabilitation efforts so that the affected people take a fresh start following the devastation caused by the natural calamity.The President thanked the Chinese Government and its EXIM Bank for assistance in the project which was crucial for communication linkage between three major cities of the Sindh province.

The President said various components of the proposed road project be completed on the basis of foreign loan facility, Public Private Partnership and the share be contributed by the Government of Sindh.The meeting was informed that LBOD (Left Bank Outfall Drain) system was damaged at various locations as it was primarily designed for 3500-4000 cusecs whereas it experienced a discharge of more than 14000 cusecs.

The meeting also considered recommendations of Planning and Development department for the allocation of the loan, including the share to be contributed by the Government of Sindh for the rehabilitation and reconstruction of the proposed road and that of the drainage system. – APP