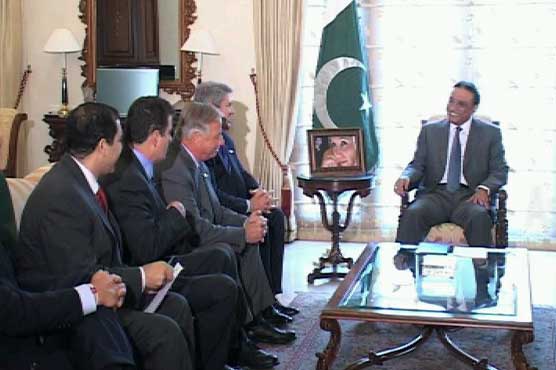 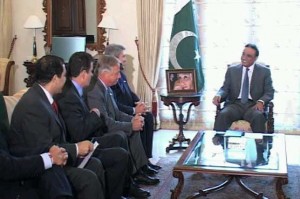 Other members of the delegation included Jeffrey Duncan, Henry Cuellar, Gene Green, Michael Fitzpatrick and Nick Palarino, Charles Snyder and Anne Bennet.Interior Minister Rehman Malik, Secretary to President Malik Asif and Additional Secretary Foreign Affairs Dr Asad M Khan, assisted the President during the meeting.Discussing Pak-US bilateral relations and recent developments, the President called for mutual understanding of each other’s point of view and need for greater interaction at all levels to avoid any misunderstanding and negative impressions that would potentially endanger close working relationship at this critical hour.President Zardari emphasized upon the need for both sides to exercise restraint and avoid uncalled for public criticism as it undermines efforts to stabilize the equation and working closely for shared goals.

He said the democratic dispensation of Pakistan believed in trade rather than aid as a solution to the weak and stressed economy.The President also called for expediting ROZs legislation, terming it crucial for creating economic opportunities particularly for the people of militancy-hit areas.About war against militancy and its impacts on Pakistan economy, the President said that combined affects of war against militancy and the recent natural calamities, have adversely impacted Pakistan economy thus restricting Government efforts to provide economic relief to the people.He said that under the prevailing situation, international assistance in various projects was critical.

Discussing regional situation, the President reiterated Pakistan’s principled stance of its abiding interest in the stability of Afghanistan.He said Pakistan has always called for an Afghan-led and Afghan-owned solution. He vowed Pakistan would continue to support all efforts, directed towards permanent peace, stability and development of Afghanistan.He also mentioned recently held 6th Trilateral Summit and Pakistan’s role to assist in efforts for restoration of stability and peace in Afghanistan.Michael McCaul ® said that US will continue to attach great importance to bilateral relations and added that US-Pak relations should be encouraged at all levels.He expressed strong commitment of US to continue to support Government of Pakistan in its efforts to promote peace and stability in the region.US Congressmen appreciated Pakistan’s efforts to normalize relations with its neighbours and its decision to extend MFN status to India. – Dunya